Canada’s airports are asking Prime Minister Justin Trudeau to step up relief efforts for industries hardest hit by the pandemic, as the governing Liberal Party prepares to roll out a recovery package for the nation’s economy.

The Canadian Airports Council will issue a request Friday for the government to extend rent relief to airports beyond this year, and to provide long-term interest free loans and other funding to help the sector stave off a historic revenue loss.

Daniel-Robert Gooch, president of the Ottawa-based advocacy group, said he’s hoping the government will provide enough help to cover a “big chunk” of the almost $3 billion airports will need to borrow through the end of next year to cover expenses and keep workers employed.

“We’ve been talking to anybody in government who would listen, going on seven months,” Gooch said in an interview. “Our sector has not seen anything like this. Hopefully we never see anything like it again.”

Trudeau has been reluctant to make any moves that could be seen as bailing out specific companies or industries, even in troubled sectors like air travel. Instead, the government has launched a series of less-targeted lending and subsidy programs for business. 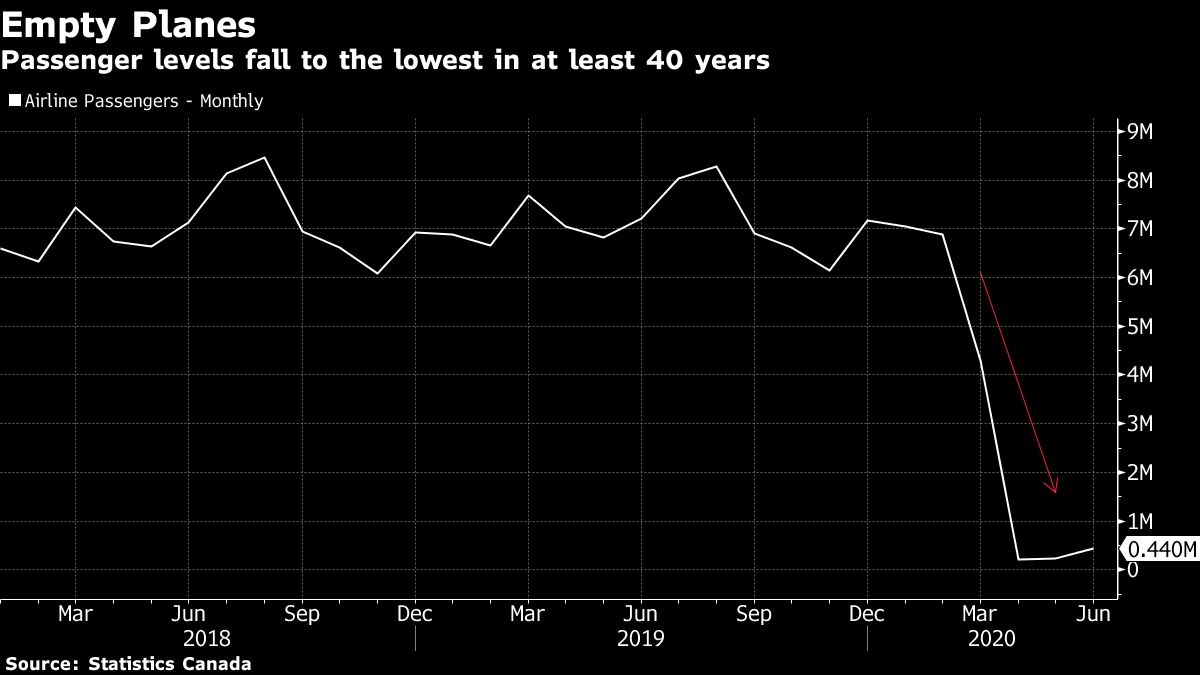 If some key decisions aren’t made in the next couple of months, “we start to look at really difficult decisions,” Gooch said, adding those range from fare increases to the potential closure of smaller airports, he said. The council represents more than 100 airports across the country, including global hubs like Pearson in Toronto, Montreal’s Pierre Elliott Trudeau airport, and Vancouver International.

But there’s hope that with his flagship income support program winding down, Trudeau may show more love for Corporate Canada as his government prepares new longer-term measures to bolster the economy. In addition to the airline sector, Trudeau is facing pressure to help the broader tourism industry as well manufacturing, tech, autos, and oil and gas.

Few sectors have fared worse than air transport, however.

Air Canada, the country’s largest carrier, has lambasted the country’s stringent travel rules and lack of direct financial aid, and has threatened to suspend more routes and cancel orders of locally made planes.

Airports in Canada will lose C$4.5 billion in revenue by the end of next year, making it necessary to borrow C$2.75 billion to cover expenses over that period, the council said. It estimates traffic will drop 72% this year, with hardly any recovery expected in 2021.

The government has provided some help, waiving ground lease rents until December, but airports want that extended for as long as revenues are depressed. Many airports benefit from a wage subsidy program, yet that’s not enough to cover mounting losses, Gooch said.

Some airports qualify for a new business loan programs, Gooch said, noting that American airports receive direct grants from the U.S. government to keep them afloat.

The government understands “it’s been a disproportionate impact in terms of revenue losses and job losses relative to other parts of the economy,” Gooch said. “I am optimistic that we will see something,” he said, adding “we hope that it’s enough.”