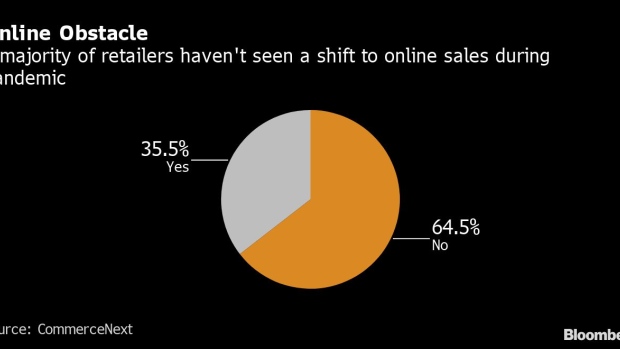 Packages shipped from Amazon.com move along a conveyor belt at the United Parcel Service Inc. (UPS) Chicago Area Consolidation Hub (CACH) facility in Hodgkins, Illinois, U.S., on Monday, Nov. 28, 2016. Online stores are counting on shoppers to spend big during the "Cyber Five" period from Thanksgiving to Cyber Monday to make up for time spent earlier this month obsessing about the presidential election instead. Photographer: Luke Sharrett/Bloomberg , Bloomberg

The coronavirus outbreak has stalled American retailers’ e-commerce growth, sparked traffic declines and pushed many to lower quarterly guidance, according to a survey published Wednesday by CommerceNext, an e-commerce marketing and consulting firm.

Since mid-February, when coronavirus began impacting the U.S., about half of retailers said their e-commerce traffic has been trending downward. This is a concerning development for retailers that are relying on web sales for a lifeline as mandatory closures of nonessential businesses shutter wide swaths of the industry. Many of these companies, including department stores and apparel chains, have reminded shoppers that online operations are open for business.

But consumers seem uninterested, even with large portions of the population stuck at home. A majority of companies -- almost two thirds -- with stores said sales from physical locations haven’t shifted online during the outbreak, the survey found.

“It seems intuitive that if people were at home, that would lead to more e-commerce sales,” Scott Silverman, founder of CommerceNext, said in an interview. “The fact that we’re not seeing sales shift from stores to online is an indication of just general consumer uncertainty and being preoccupied with watching the news, taking care of their families and all the other things that become priorities during crisis situations.”

Supply chains have also been challenged, with executives reporting disruptions of varying degrees from the pandemic, the survey found. Retailers like Victoria’s Secret, T.J. Maxx and Marshalls have opted to shut down online operations in addition to stores.

“There are things that nobody would ever anticipate, like e-commerce shutting down,” Silverman said. “You would think that this would be the one part of their business that they could keep up in running.”

The study compiled interviews from 100 e-commerce executives at both traditional retailers and direct-to-consumer brands during March 16 and 17, which coincides with the period many retailers scaled back operations. Categories of retailers included apparel, personal care, consumer electronics and food and beverage.