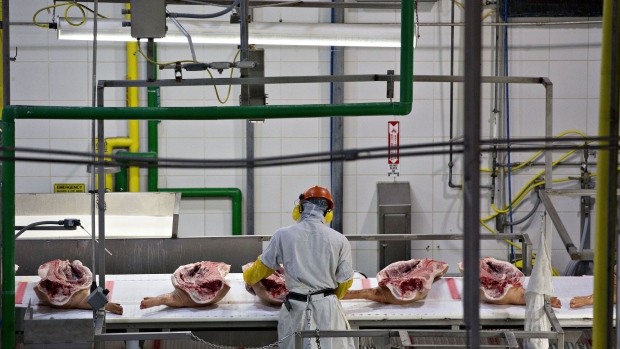 An employee handles sides of pork on a conveyor at a Smithfield Foods Inc. pork processing facility in Milan, Missouri, U.S., on Wednesday, April 12, 2017. WH Group Ltd. acquired Virginia-based Smithfield, the world's largest pork producer, in 2013 for $6.95 billion. As Smithfield can't export sausage, ham and bacon from its U.S. factories, because China prohibits imports of processed meat, WH Group opened an 800 million-yuan ($116 million) factory in Zhengzhou that will produce 30,000 metric tons of those meats when it reaches full capacity next year. Photographer: Daniel Acker/Bloomberg , Bloomberg

(Bloomberg) -- A new study ties 6% to 8% of U.S. Covid-19 cases through late July to outbreaks at meatpacking plants and subsequent spread in surrounding communities.

The findings show “a strong positive relationship” between meatpacking plants and “local community transmission,” suggesting the plants act as “transmission vectors” and “accelerate the spread of the virus,” according to a peer-reviewed study published last week in the Proceedings of the National Academy of Sciences of the U.S.

The conclusions are sure to further inflame controversy over the role of the meatpacking industry in the pandemic and the Trump administration’s enforcement of workplace safety laws as outbreaks at slaughterhouses emerged. Trump issued an executive order on April 28 directing meatpackers to reopen closed facilities.

Researchers at Columbia University’s School of International and Public Affairs and the University of Chicago’s Booth School of Business found that the risk of excess death primarily came from large meatpacking plants operated by industry giants. Communities that acted to shut down slaughterhouses reduced spread, according to the researchers.

“The vast majority” of those cases were “likely related to community spread outside these plants,” the researchers wrote.

“Ensuring both public health and robust essential supply chains may require an increase in meatpacking oversight and potentially a shift toward more decentralized, smaller-scale meat production,” the study concluded.

Press representatives from the USDA and the North American Meat Institute didn’t immediately respond to requests for comment.