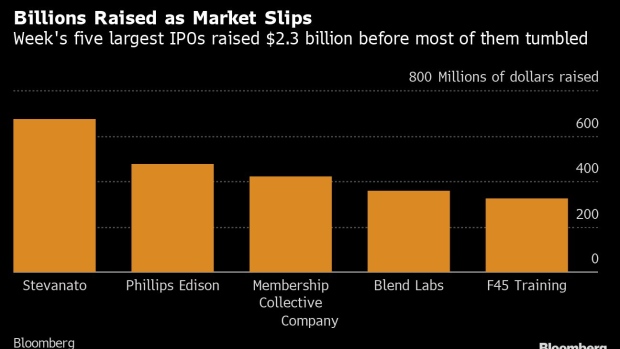 (Bloomberg) -- Attempts to kick-start the quarter’s run on initial public offerings are encountering a mixed reception.

Weak price action is plaguing one of the busiest weeks of IPOs this year as high-profile debuts like Robinhood Markets Inc. and Instacart Inc. loom in the near future.

Eighteen IPOs priced on U.S. exchanges this week, according to data compiled by Bloomberg. That ties for the third-most of 2021. The high volume picked up where the first half left off, but the performance of the newly listed stocks are leaving some investors disappointed.

In total, this week’s IPOs are trading an average of 1.3% below their respective offering prices, according to data compiled by Bloomberg.

The weak trading also follows weaker book builds. Among 26 IPOs that took place so far this quarter, not a single one priced above its indicative range. That’s a steep drop from the first half of the year, when nearly one in five IPOs priced above-range and may weigh on other upcoming IPOs.

Moreover, the timing of these sell-offs is not ideal for the robust pipeline of deals expected throughout the second half. Advisors typically strive to start an IPO window with deals they believe will perform well, establishing strong momentum ahead of subsequent listings.