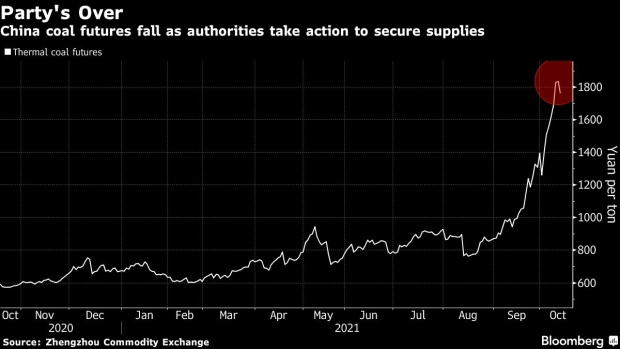 (Bloomberg) -- A spectacular rally in coal futures in China hit an abrupt halt as the government began a policy blitz intended to tame prices and ease the nation’s power crisis.

The most-active thermal coal contract on the Zhengzhou Commodity Exchange traded 4.4% lower Wednesday, after plunging in overnight trading to end an advance that’s seen the fuel more than double since the beginning of September.

The National Development and Reform Commission, China’s top economic planning agency, said late Tuesday it aims to ensure coal output increases to 12 million tons a day and will give the fuel priority for deliveries through ports and over railroads. It’s also evaluating other measures to intervene in prices and has “zero tolerance” for those spreading false information or collusion in the market, according to a statement.

Regional authorities are also stepping in. Officials in Yulin, a coal mining hub in Shaanxi province, have asked state-owned mines there to immediately lower prices by 100 yuan ($15.67) a ton, with harsh measures being threatened for any companies that don’t comply, industry publication China Coal Resource reported, without citing its sources.