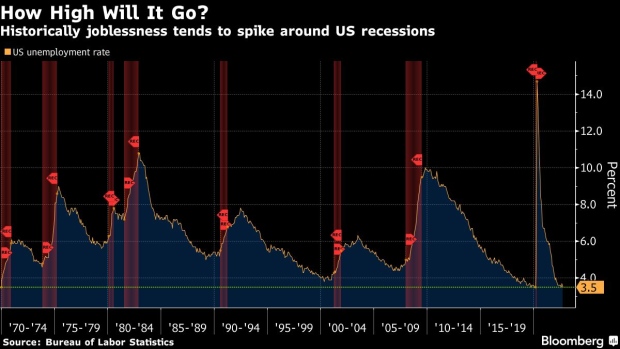 A job seeker, left, shakes hands with a representative during a Shades of Commerce Career Fair in the Brooklyn borough of New York, U.S., on Saturday, Feb. 17, 2018. The latest initial jobless claims, which correspond to the February employment survey period, fell from the previous week to a five-week low and continue to flirt with multi-decade lows. , Bloomberg

(Bloomberg) -- The odds of a US recession are rising. And the chances it will be mild are falling.

The seeds of an eventual downturn are being sown by a taut jobs market that is pushing up wages and inflation, prompting the Federal Reserve to raise interest rates further into restrictive territory to get price pressures under control.

“The higher the Fed needs to go on the terminal rate, it raises our conviction that a recession will happen next year,” said Deutsche Bank AG chief US economist Matthew Luzzetti. “But it also raises the risk it will be a deeper one.”

Data out on Friday are expected to show that the labor market remains too tight for the Fed’s liking. While projections show October payroll growth moderated to 200,000, such an increase would still be higher than a monthly pace shy of 100,000 that economists reckon is neither too strong nor too weak for the economy over the longer term.

Fed Chair Jerome Powell again made clear on Wednesday that the central bank needs to bring labor supply and demand back into better balance if it’s to succeed in reducing inflation to its 2% goal from 6.2% in September. Wages are rising at about a 5% annual clip, above the 3%-3.5% rate thought to be consistent with the Fed’s inflation objective.

Speaking to reporters after the Fed raised interest rates by another 75 basis points, Powell voiced hope that a softening of the labor market could come about mainly through a drop in highly elevated job vacancies rather than via outright job losses.

He said it was still possible the US could avoid a recession though he acknowledged that the window for doing so has narrowed give how persistent inflation has proven to be.

Ahead of the midterm elections next week, some Democrat lawmakers have stepped up their warnings to the Fed against continuing to raise interest rates at an “alarming pace” and risking jettisoning millions of Americans out of work.

However, an increasing number of economists think it will take a recession for the Fed to achieve its aim of cooling price pressures. The probability of a downturn over the next 12 months stands at 60%, up from 50% odds in September and double what it was six months ago, according to a Bloomberg survey of economists last month.

On the whole, they expect the recession to be mild. Economists who saw a greater than 50% chance of a downturn over the next 12 months in the survey forecast a rise in unemployment to about 5% on average. (Bloomberg Economics is forecasting an increase to 4.9%).

While that would likely mean the loss of more than two million jobs, the 1.5 percentage points rise in joblessness would be significantly below the 3.8-points average increase in the 12 downturns since World War II. And it would represent a much better outcome than the last two contractions, which saw unemployment rise to double-digit levels as a result of the pandemic and the global financial crisis.

But some economists think that’s too sanguine. They argue that it will take a deeper contraction in the labor market for increasingly entrenched inflation to retreat.

“It could start out feeling like a mild recession but then intensify as we move through time,” said Aneta Markowska, chief financial economist at Jefferies in New York. She sees a downturn beginning in the third quarter of 2023 that eventually pushes unemployment to about 7%.

Markowska said the Fed will be hesitant to cut interest rates, which in turn will lead to a deeper downturn.

Fiscal policy could also end up as drag on the economy if Republicans gain control of Congress in the midterms and push for cuts in government spending, Luzzetti said.

Northwestern University professor Robert Gordon reckons that unemployment would have to rise to at least 6% for the Fed to lower inflation back to target over the next few years. Inflation is being boosted not only rising wages but also by slumping productivity, which is putting further upward pressure on companies’ unit labor costs, he said.

“The Fed is not going to be successful in bringing down inflation as much as it wants over the next two years and it will have to face a choice of temporarily giving up on its objective on inflation or raising rates a lot higher than the market thinks it will,” Gordon said.

Getting inflation down from an eventual 3% to 2% will be particularly costly, said Johns Hopkins University professor Laurence Ball. While the Fed should continue to talk tough now to contain inflation expectations, Ball said it might ultimately be better off not trying to push price gains all the way back down to its target.

Nomura Securities senior US economist Robert Dent, who was among the first on Wall Street to forecast a recession, now thinks it will be deeper than he first thought.

He sees the unemployment rate rising to 6.4% in 2024, instead of 5.9%, with a payrolls loss of about three million. The reason for the more pessimistic take: Inflation appears increasingly entrenched and labor shortages are proving to be more long-lasting.

“It feels like a mild recession may be out the door,” he said. “It’s more of a moderate one in the base case with the risk of something more severe.”