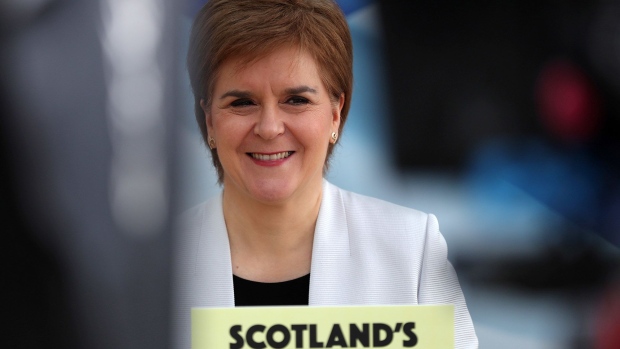 Scottish First Minister Nicola Sturgeon promised again she would lay the ground to hold an independence referendum by the end of 2023. What she didn’t say is how she plans to force the U.K. to acquiesce to one.

Addressing her Scottish National Party conference, she told delegates the drive to win support for breaking away from the rest of the U.K. would restart as soon as the pandemic allows. The aim is to build the argument for Scotland to shape its own future and to seek to rejoin the European Union. Sturgeon said she would be “candid” about the challenges.

“Next year, Covid permitting, as we emerge from winter into spring, the campaign to persuade a majority of people in Scotland that our future will be more secure as an independent nation will resume in earnest,” Sturgeon said on Tuesday. “In the course of next year, I will initiate the process necessary to enable a referendum before the end of 2023.”

The SNP leadership in Edinburgh vowed to hold another vote on full autonomy after the U.K. left the EU. An election victory in May strengthened Sturgeon’s mandate, though also prompted Prime Minister Boris Johnson to double down on his refusal to grant the legal power for Scotland to organize one. The Scottish electorate is roughly split down the middle on the issue.

The emergence of the omicron coronavirus variant, meanwhile, has cast a shadow over Sturgeon’s plan to reinvigorate her party’s push for a say on Scotland’s constitutional future. Just before her speech, Sturgeon was urging the U.K. to tighten travel restrictions further after six cases of the strain emerged in and around Glasgow.