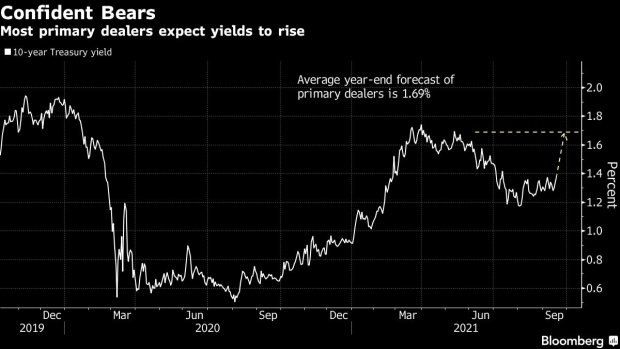 (Bloomberg) -- Bond bears, long frustrated by stubbornly low Treasury yields, are girding for a make-or-break week as the Federal Reserve is expected to start laying the groundwork for reducing stimulus.

The bond market enters this potentially pivotal stretch at a crossroads: 10-year yields are testing the top of their range since early July as traders anticipate that the Federal Open Market Committee will hint in its Sept. 22 decision at a plan to curb its bond buying.

For the bearish contingent, which is the majority on Wall Street, this meeting represents one of the last prospective triggers this year for a decisive breakout in yields. Primary dealers surveyed by Bloomberg News predict on average that 10-year rates will be more than 30 basis points higher by year-end.

Fed tapering signals are hardly the only focus. Strategists also see likely ammunition for bears in the central bank’s new forecasts for its benchmark rate. An unexpected hawkish shift in these projections in June jolted financial markets and flattened the yield curve by the most since the early days of the pandemic.

“My view has been that the September FOMC will be a potential catalyst to get things moving toward higher yields by year-end,” said Blake Gwinn, a strategist at RBC Capital Markets, who expects 10-year yields to rise to 1.75% next quarter.  “If that fails to materialize, I am not sure if other catalysts will get us there, and we may be stuck in range-bound trading in Q4.”

The average forecast in a Bloomberg survey of primary dealers is for benchmark 10-year yields to climb to 1.69% by year-end, from a bit under 1.4% now. Deutsche Bank AG was the most bearish, forecasting 2.25%. HSBC Holdings Plc’s Steven Major, known for his persistent bullish views, had the lowest forecast, at 1%. The Fed is likely to hint Wednesday that it’s ready to taper soon with a formal announcement coming in November, according to a separate Bloomberg survey of economists. The central bank is also expected to hold rates near zero through 2022 before delivering two quarter-point increases in 2023 and three more the year after.

The risk is that a hawkish shift in Fed projections known as the “dot plot” will prompt traders to recalibrate expectations for the central bank’s policy path, as happened in June. It will take just three officials to raise their dots for 2022 for a full hike to be the new median for next year, assuming everyone else keeps their forecasts where they were. Such a scenario would leave 5- and 10-year Treasuries particularly vulnerable to a selloff, according to Subadra Rajappa, head of U.S. rates strategy at Societe Generale.

Expectations of such a shift have already contributed to shrinking the 5- to 30-year yield spread to the smallest since August 2020, when the Fed unveiled its new inflation framework. In options, bets emerged Friday on even higher 5-year yields. “The dots in next week’s meeting is going to be very important, not just for 2024, but also for 2022,” said Rajappa, who sees 10-year yields at 1.7% at year-end. “We believe this is an underpriced risk and bodes well for our call for higher yields.”