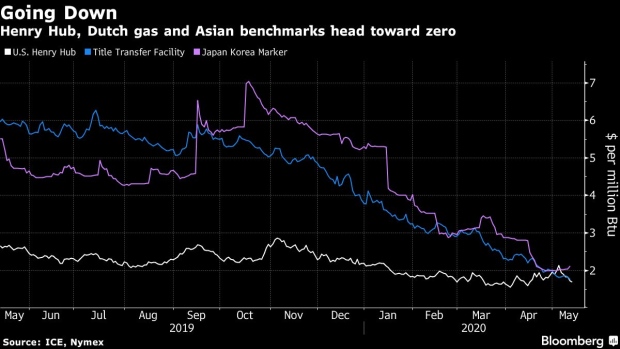 (Bloomberg) -- One of China’s biggest natural gas distributors flagged the possibility of sub-zero market prices at its shareholder meeting, a scenario that would echo oil’s record plunge last month that stunned global markets.

Gas prices could turn negative due to a lack of storage capacity, Wang Yusuo, the billionaire chairman of ENN Energy Holdings Ltd., said at the online event from Hong Kong. He didn’t specify any particular region or benchmark, and added that any dip into sub-zero territory would be short-lived.

While lower gas prices would benefit ENN through cost savings on imports, Wang’s comments serve as a warning to gas traders that the spectacular collapse in oil markets might befall them. U.S. oil futures plunged to negative $40.32 a barrel on April 20, an unprecedented level in the world’s most liquid crude oil contract and which inflicted billions of dollars in investor losses.

“For natural gas, I have heard about the possibility of negative prices. I also think it could happen,” Wang said. “That’s because natural gas has even more limited storage capacity and its production is also more rigid. So it may happen. But I don’t think it will be a dominant or long-lasting scenario.”

Gas price benchmarks across Asia, Europe and the U.S. have all traded near record-low levels this year amid a glut of supply and lackluster demand as the coronavirus paralyzes economies. Traders and analysts surveyed last week by Bloomberg News said while it’s unlikely that prices will slip below zero, they wouldn’t rule out the possibility.

China’s natural gas market is somewhat bifurcated, with its state-owned giants largely in charge of producing and importing gas, and smaller companies like ENN purchasing it from them and then distributing the supply to city utilities and industrial users.

ENN, which mostly operates in eastern and southeast China, has been among the more innovative distributors. It built its own liquefied natural gas terminal near Shanghai, and plans to take advantage of cheap spot prices by boosting imports of the fuel this year, according to the company.