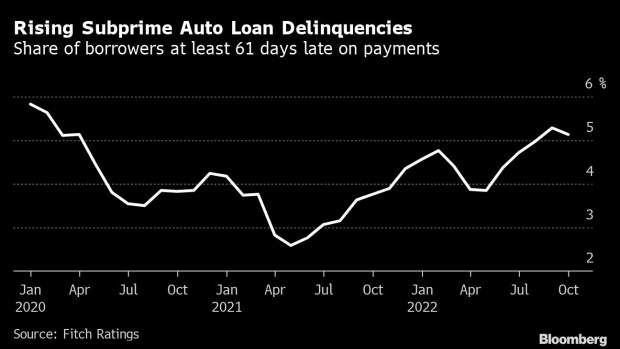 GAITHERSBURG, MARYLAND - APRIL 12: In an aerial view, a CarMax lot holds hundreds of used cars and trucks on April 12, 2022 in Gaithersburg, Maryland. Consumer prices rose 8.5 percent in the year through March 2022, reaching the fastest inflation rate since 1981 with the U.S. average for a gallon of regular gas peaking at $4.33 on March 11. (Photo by Chip Somodevilla/Getty Images) , Photographer: Chip Somodevilla/Getty Images

(Bloomberg) -- Subprime auto loan borrowers are increasingly falling behind on payments, and the value of used cars is dropping, two trends that are clobbering bonds tied to the debt.

Yields on some of the riskiest such bonds have jumped to about 6.5 percentage points more than Treasuries as of last week, a risk premium that’s widened up about 2 percentage points from the end of September, according to data compiled by JPMorgan Chase & Co. Excluding a few weeks during the pandemic, current levels are the widest since 2010.

Sellers of subprime auto bonds are bearing the brunt of investors’ increased skepticism. Southern Auto Finance Co. tried to sell an almost $120 million bond offering last month, in what would have been its first such offering, but delayed the deal citing market volatility. Some money managers say they are focusing on companies that have issued the bonds for years and may be safer, and also looking at safer securities within individual transactions.

“It is more prudent right now to play subprime auto from regular and higher quality issuers that have been through different economic cycles,” said David Goodson, head of securitized credit at Voya Investment Management, in an interview. “We remain defensive.”

There may be good reason to be defensive now. The current delinquency rate for subprime auto loan bonds has been rising this year, at 5.13% as of October, based on borrowers 61 days or more late, according to data from Fitch Ratings. That’s compared with 3.76% in the same month last year, when households were still flush with cash from pandemic stimulus. And used car prices have dropped about 15% this year according to the Manheim US Used Vehicle Value index, signaling that if times get more difficult and investors have to repossess these cars, the vehicles will be worth less and money managers could lose more.

But subprime auto bonds are built to withstand relatively high losses. For a median AAA portion of subprime auto ABS sold in 2022, the underlying loan pool would need to experience an annualized default rate of 78% over life of the deal before investors would begin taking a loss on their principal investment, according to a recent Morgan Stanley research report citing stress tests performed in May.

For the BB rated tranches of 2022 subprime auto ABS, it would take a 19% default rate over the life of the deal for the median bond to take a loss, according to Morgan Stanley’s research. For comparison, on subprime auto bonds during the great financial crisis the peak average default rate was about 15%, according to James Egan, co-head of securitized research at Morgan Stanley.

Loan losses can end up being far worse than expected, as investors learned during the financial crisis. But to some investors, subprime auto bonds can take heavy enough default rates to make the bonds worth looking at.

“We like to think of these structures as bending but not breaking,” said Jordan Chirico, head of Indianapolis-based 352 Capital, a firm backed by money manager Leucadia Asset Management. 352 Capital has been buying subprime auto bonds rated in the BB and BBB tiers.

For now, consumers are still faring well. Unemployment was at 3.7% in October, a report said on Friday, far below the average for the last 10 years of about 5.3%.

“It takes so much to break these bonds or to really find a material loss, that it’s still not in the cards, barring some astronomical recession,” said Vadim Verkhoglyad, a vice president at market data company dv01.

Nielsen’s $2 billion secured bond sale is being talked with a yield of 11% to 11.25%, and dealers have drummed up the minimum amount of orders to potentially sell the securities.

Heungkuk Life Insurance Co., the South Korean insurer that last week triggered a perpetual bond rout in Asia with its convention-defying move to delay early repayment, has reversed its decision and will exercise the call option for its $500 million perpetual note issued in 2017.

--With assistance from Charles Williams.