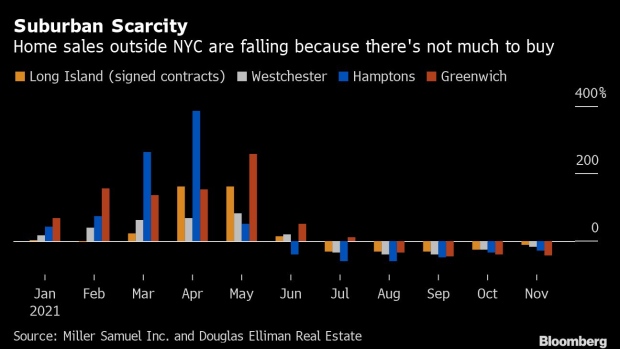 (Bloomberg) -- A shortage of home listings is putting a damper on property sales in the suburbs of New York City.

Potential buyers are coming up empty in their search for a place-- and that’s sent contracts plunging for the fifth consecutive month in Westchester County and Long Island, according to a report Thursday by appraiser Miller Samuel Inc. and brokerage Douglas Elliman Real Estate.  In tony Greenwich, signed deals fell in November for the fourth straight month. It has been sixth straight declines in the Hamptons.

“There’s confusion that falling contracts means declining demand, but that’s not the case,” said Jonathan Miller, president of Miller Samuel.  “The reality is demand is unusually high but there just isn’t enough inventory to satiate it.”

Buyers are snapping up homes faster than sellers are listing them.  In Long Island, excluding the Hamptons, there were 1,950 signed contracts last month -- or 13% fewer than a year ago.  At the same time, new listings fell 26%, to 1,751, the firms said.

Pending deals for single-family homes in Westchester fell 19% to 452 last month.  There were just 286 new listings added to the market, or 33% fewer than a year ago.