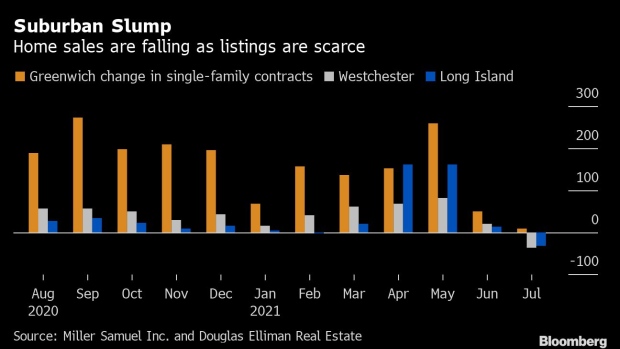 (Bloomberg) -- Listings for single-family homes are getting scarcer in New York City’s suburbs, and that’s putting a dent in sales.

Contracts to purchase houses declined last month for the first time in more than a year in some areas across the region, according to a report Thursday by appraiser Miller Samuel Inc. and brokerage Douglas Elliman Real Estate.

Signed deals fell 36% in Westchester County and 31% in Long Island’s closer-in suburbs -- the first year-over-year drop for each since June 2020. The Hamptons contracts had their second consecutive decrease since May 2020, with deals in July falling a much-larger 61%.

Demand for houses is still high among city dwellers on the hunt for more-spacious living arrangements, as many New Yorkers see a future where they’re working partly from home. But listings are failing to keep up with that interest, and prices for what’s available are getting bid up.

In the Hamptons, just 150 houses were newly listed in July, 36% fewer than a year earlier. Westchester saw a 48% decline in new offerings last month, while Long Island listings -- outside the Hamptons and North Fork -- dropped 18%.

“We’re having an inventory shortage and it’s clearly affecting everything,” said Scott Durkin, chief executive officer of Douglas Elliman. “We need more new construction and more people who decide to list. We’re waiting for that.”

One exception to the decline in contracts was the tony Connecticut town of Greenwich, where deals rose 10% last month from a year earlier. Still, new listings slipped 8.5%.