A huge backlog of vessels was building up around the Suez Canal amid warnings that the salvage team could need days -- or even weeks -- to prise out the giant container ship that’s blocking the crucial waterway.

Work to re-float the Ever Given and allow passage for oceangoing carriers hauling almost US$10 billion of oil and consumer goods continued without success on Thursday in Egypt. Tugs and diggers have so far failed to budge the vessel, and some experts say the crisis could drag on for several days. The Suez Canal Authority has temporarily suspended traffic along the waterway.

“I can’t exclude that it can last weeks if the ship is really stuck,” said Peter Berdowski, chief executive officer of Boskalis Westminster, the parent company of the salvage team. The process would take that long if “you need to get rid of cargo and you need to do dredging as well,” he said in an interview on the Nieuwsuur TV program in the Netherlands on Wednesday.

About 12 per cent of global trade goes through the canal, making it so strategic that world powers have fought over the waterway since it was completed in 1869. For now, all that traffic is backed up with the Ever Given aground in the southern part of the canal, creating another setback for global supply chains already strained by the e-commerce boom linked to the pandemic.

At about a quarter mile long (400 meters) and weighing in at 200,000 tons, the sheer size of the vessel is overwhelming efforts to dig it out. A huge yellow excavator, itself about twice as tall as its driver, looked like a child’s toy parked next to the ship’s hulking bow.

“In our view the situation now looks unlikely to be heading for a swift resolution given that it is not a simple grounding,” Braemar ACM Shipbroking said in a report on Thursday. “We now do not rule out several days of blockage in the canal as, among other things, the vessel will very likely have to be lightened and dug out at the ends.”

The struggle to dislodge the ship falls to SMIT Salvage BV, a legendary Dutch firm whose employees fly from one shipping incident to the next, often boarding vessels during violent storms. Japan’s Nippon Salvage Co. has also been hired to assist in the re-floating, according to a statement from the Ever Given’s operator, Evergreen Marine Corp. Taiwan Ltd.

The best chance for returning shipping to normal may not come until Sunday or Monday, when the tide will reach a peak, according to Nick Sloane, the salvage master responsible for re-floating the Costa Concordia, which capsized off Italy in 2012.

The salvors may have to lighten the ship by removing things like the ballast water, which helps keep it steady while at sea. Fuel could also be unloaded.

A rough estimate shows the blockage is snarling about US$9.6 billion worth of traffic a day, based on calculations from Lloyd’s List that suggest westbound traffic is worth around US$5.1 billion a day and eastbound traffic approximately US4.5 billion. On Wednesday, 185 vessels were waiting to cross the canal, according to shipping data compiled by Bloomberg, while Lloyd’s estimates there’s 165.

“The biggest impact we’re seeing from all the vessels we’re tracking is around some bulks and container shipping,” Wood Mackenzie Ltd. Vice President of Refining, Chemicals and Oil Markets Alan Gelder said in an interview on Bloomberg Television. “We see less of an impact on oil, oil products and LNG, but the impact on those things get bigger if we are still in this situation in a few days.” 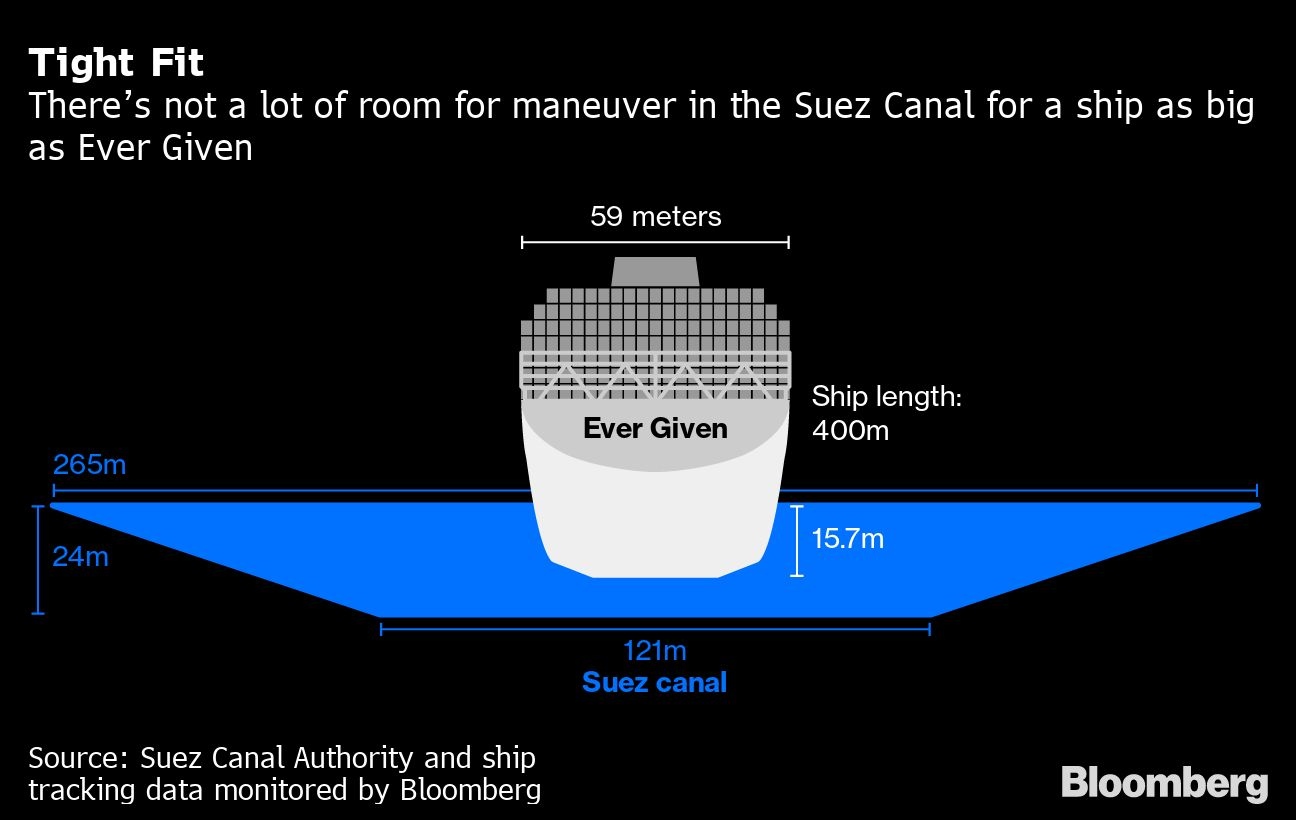 The incident began on Tuesday when strong winds kicked up sands along the banks of the 120-mile canal. The waterway is narrow -- less than 675 feet wide (205 meters) in some places -- and can be difficult to navigate when there’s poor visibility.

But the Ever Given stayed its course through the canal, on its way to Rotterdam from China. As gusts that reached as high as 46 miles an hour swept up dust around it, the crew lost control of ship and it careened sideways into a sandy embankment, blocking nearly the entirety of the channel.

At the heart of all of this is the ship’s massive scale. Container vessels have nearly doubled in size in the past decade as global trade expanded, making the job of moving such ships much harder when they get stuck.

Even while key routes -- including the Suez Canal -- have been widened and deepened over the years to accommodate the mega-sized vessels, the work to dig them out after they get stuck takes enormous power.

The blockage highlights a major risk faced by the shipping industry as more and more ships transit maritime choke points including the Suez, Panama Canal, the Strait of Hormuz and Malacca Strait. Such occurrences could become more common as ships get bigger and waterways become more congested.

Oil companies are starting to prepare for the worst. On Wednesday, there was an uptick in interest from oil companies looking to book tankers with options to avoid the canal, according to a broker, and several bid for space on the pipelines that allow bypass of the waterway completely.

For now, that’s a just-in-case move. Container ships will most likely have to wait it out, as the main alternative is the unattractive option of sailing around the southern tip of Africa. However, at least one shipment of liquefied natural gas from the U.S. has potentially diverted course toward the Cape of Good Hope and away from Suez, Wood Mackenzie analyst Lucas Schmitt said in a note on Thursday.

“We are now watching out for –- and expect -- vessel diversions,” Braemar said in its report. Large tankers carrying oil products from the Atlantic basin “are now likely to be evaluating a passage around the Cape of Good Hope.”