Rescue teams are working to dislodge a giant vessel from the Suez Canal in an effort to get traffic moving again in one of the world’s most important waterways.

The Ever Given, a container ship longer than the Eiffel Tower that ran aground in the southern part of the canal in Egypt, is still stuck across the waterway despite efforts to release it with tugs and excavators. One port agent said earlier that traffic could resume by tomorrow, but the Suez Canal Authority hasn’t given a timetable.

The incident is a reminder of how much international trade is channeled through so-called chokepoints -- geographically constrained waterways that include the Strait of Hormuz and Panama Canal. Dozens of vessels are already gridlocked at Suez and a lengthy halt could further stretch supply chains that have already been disrupted by the coronavirus pandemic.

The 193-kilometer-long (120 miles) Suez Canal is among the most trafficked waterways in the world, used by tankers shipping crude from the Middle East to Europe and North America. About 12 per cent of global trade and 8 per cent of liquefied natural gas pass through the canal, as do around 1 million barrels of oil each day. 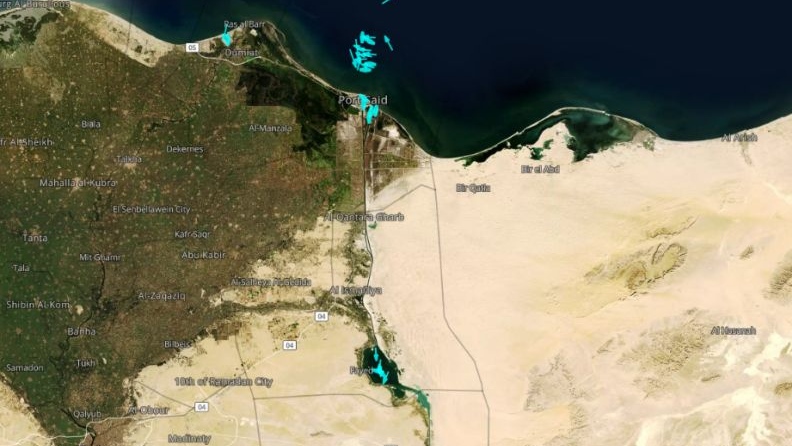 The disruption comes at a time when oil prices were already volatile. Crude surged above US$70 a barrel earlier this month on Saudi production cuts, only to slump close to US$60 this week due to setbacks in Europe’s coronavirus vaccine program. Brent crude rose 5.4 per cent to US$64.07 as of 4:26 p.m. in London.

The Ever Given was grounded early Tuesday amid poor visibility caused by a dust storm and wind speeds that reached 40 knots, resulting in a “loss of the ability to steer the ship,” according to the canal authority.

The vessel deviated “from its course due to suspected sudden strong wind,” Taiwan-based Evergreen Line, the time charterer of the vessel, said in an emailed response to questions. Japan’s Shoei Kisen Kaisha Ltd., among those listed as the ship’s owner, declined to comment.

“The vessel is likely damaged and will have to be towed,” said Captain Farhad Patel, a director at Dubai-based Sharaf Shipping Agency, which regularly handles transits through the waterway. “Nothing is confirmed, as of now, when the traffic in the Suez Canal can resume. Space restrictions caused by the grounded vessel may not allow traffic to pass.”

Another effort to dislodge the ship will be made at high tide just after 8 p.m. local time, said another shipping agent. If that doesn’t succeed, the next high tide is 8:43 a.m. on Thursday, the agent said.

Navigation is possible along the old canal, the canal authority said. But the Ever Given is stuck at a point that can’t be bypassed so the old canal can’t help. Around 150 vessels, mostly bulk carriers, container ships, and oil or chemical tankers, were waiting to traverse the canal, according to shipping data compiled by Bloomberg.

Ever Given was traveling from China to Rotterdam. The crew are safe and accounted for, and there have been no reports of injuries or pollution, according to the ship’s manager, Bernhard Schulte Shipmanagement. The vessel is carrying cargo for logistics company Orient Overseas Container Line Ltd., according to Mark Wong, a spokesman for OOCL.

At 400 meters in length, Ever Given was built in Japan about three years ago. Shipping companies have been turning to mega-sized vessels to help improve economies of scale, while some key routes -- including the Suez Canal -- have been widened and deepened over the years to accommodate them.