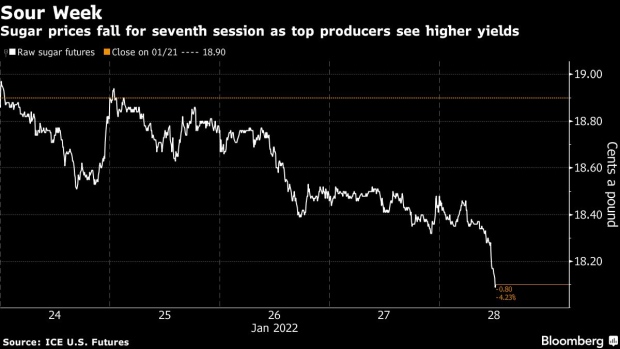 (Bloomberg) -- Sugar eased for a seventh day in New York, on track for the longest run of losses in almost two years, on signs of improved supplies and a stronger dollar.

Output in key grower India may rise about 3% to 31.9 million tons this season, the All India Sugar Trade Association said. That’s despite roughly 3 million tons being lost due to cane being diverted to make ethanol, which has become more attractive amid higher fuel prices. Also, European yields have been strong and traders are watching top shipper Brazil, where rain is expected to aid cane.

Raw sugar touched a two-week low and is heading for a 4.3% weekly drop, with the recent surge in the dollar weighing on commodities priced in the greenback.

Given the uncertainty in the sugar market and improved yields in major producers, “the upside would seem limited at the moment,” ADM Investor Services said in a note.

Raw sugar was down 1.7% at 18.09 cents a pound in New York, with a seventh straight decline the longest run since March 2020. White sugar also retreated in London.

In other soft commodities, arabica coffee was little changed and cotton fell, while cocoa futures in New York gained.