It took four months for Canada’s economy to recover almost three-quarters of its pandemic losses. Repairing the remaining damage could take years.

Output jumped four per cent in July and August, Statistics Canada reported Wednesday, bringing gross domestic product to about 95 per cent of levels in February, the last full month before lockdowns began. At the depth of the recession in April, that number was 82 per cent.

By August, the economy had recouped about 73 per cent of output lost in March and April, the worst months of the first wave.

The rebound has been swifter than originally expected, but gains are uneven, the pace is slowing and a recent spike in the number of COVID-19 cases in the country’s largest provinces is threatening future advances. Industries like hotels and entertainment face indefinite hardship, prompting some economists to revisit their prognosis for a full recovery.

An expected return to pre-pandemic levels “is likely to be pushed out as we incorporate second wave effects to a fuller extent than the risks we had previously flagged,” Derek Holt, head of capital markets economics at Bank of Nova Scotia, said by email.

Scotiabank had previously predicted output would fully recoup losses by the start of 2022, but “we’re now in the midst of another forecast round,” Holt said. 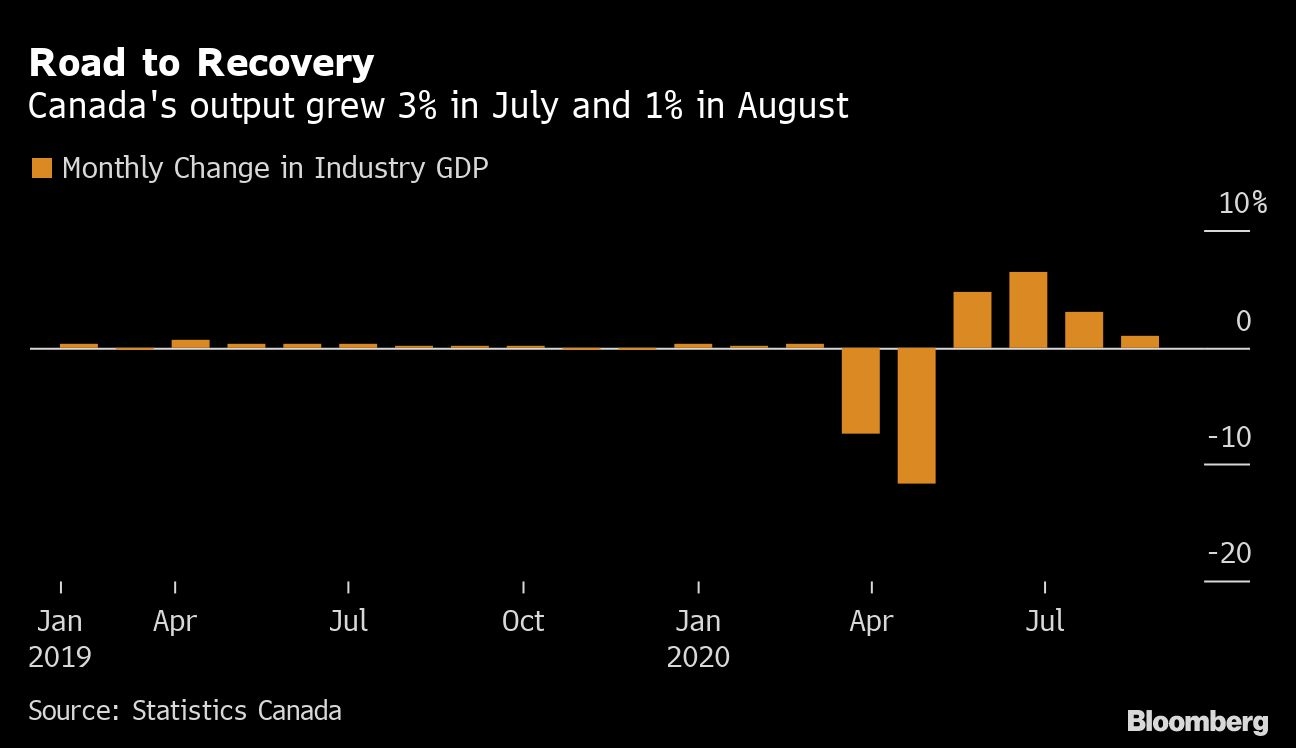 Canada’s economy could stall over the winter as cold weather and rising coronavirus cases cause some households and businesses to retrench, and the unemployment rate won’t return to pre-pandemic levels until 2025, the Conference Board of Canada said Wednesday. Some industries, like air transport, may never fully recover.

“Solid gains in 2021 and 2022 will not be enough to bring Canada’s economy back to its full potential,” the Ottawa-based research firm said in a report.

Provinces like Ontario and Quebec have already reimposed some social distancing measures to prevent the second wave from getting out of control, with bars and restaurants in Montreal shut down this week. High-frequency data -- such as Internet job postings and credit card transactions -- suggest momentum may already have stalled.

Wednesday’s release from Statistics Canada shows June was the peak month for economic growth, with output up 6.5 per cent. That was followed by a three per cent gain in July and an estimated one per cent increase in August.

The numbers suggest third-quarter GDP is on pace for annualized growth of well over 40 per cent, easily a record expansion after the worst-ever contraction between March and June.

Starting in the fourth quarter, growth will average about four per cent annualized over the next year, according to economists surveyed by Bloomberg. Those forecasts don’t incorporate a major second round of shutdowns.

Some parts of the economy are faring better than others. Agriculture and forestry, along with retail trade, real estate and banking have all surpassed February levels of output. Restaurants, energy and transport are still well below where they were in February.

“The economy sits materially below its pre-pandemic level,” Royce Mendes, an economist at Canadian Imperial Bank of Commerce, said in a report to investors. “Immediate attention has shifted away from recouping that ground in the near term and towards simply maintaining these gains now that the battle against a second wave of the virus has begun.”