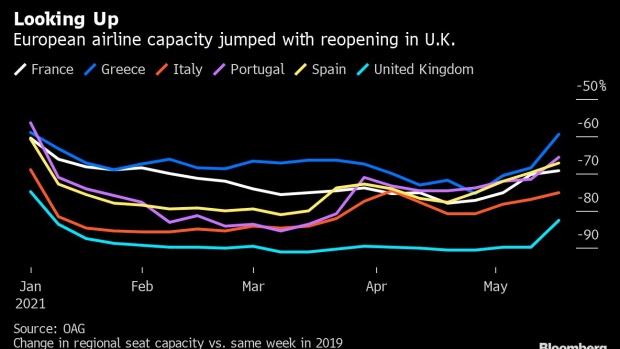 Passengers check in at London Heathrow on May 17. Photographer: Jason Alden/Bloomberg , Bloomberg

(Bloomberg) -- Europe is slowly peeling back border restrictions set in place to stop the spread of Covid-19, providing an opening for sightseers and sun-seekers to finally make plans for a summer migration to Greece, Spain or Italy.

This past week, the U.K. reversed a ban on international leisure travel, while installing a “traffic light” system that ratchets up the costs and hassles of a trip based on the risk. For now, Portugal stands alone among major countries that are both green-lit and welcoming of Brits.

The European Union, too, is moving ahead with a plan to facilitate free travel within the bloc for those who have been vaccinated, recovered or test negative for the coronavirus. It could take effect within the next week or two. All EU countries will be required to accept certificates, which will be accessible using an app but can also be printed out, starting July 1.

Arrivals from non-EU nations such as the U.S. will soon be welcomed anywhere in the bloc if they’ve been fully vaccinated for at least 14 days with any shot approved by the EU’s drug regulator or the World Health Organization. Some countries like Greece, Cyprus and Italy have already opened the door to those who have been vaccinated, test negative or some combination, including from outside Europe.

More progress is likely ahead of a G-7 summit in England in June, which could act as a catalyst for trans-Atlantic travel.

While the developments will lead to a gradual resumption of international tourism, for now a raft of jurisdictions make for a messy, overlapping and rapidly changing set of guidelines.

On Saturday, for example, Germany imposed fresh restrictions on travelers from the U.K., citing concern over a highly transmissible Covid-19 strain first identified in India.

Residents of Britain and the European Union, along with a rising number of vaccinated Americans who are eager to travel to the region, will need to pay close attention to news announcements and government websites, check with airlines and consult industry groups like the International Air Transport Association to keep up with the latest information.

“Booking a trip is a financial risk, so you should do your research before parting with any cash,” said Naomi Leach, deputy editor at U.K. consumer site Which Travel. “Even if you're fully vaccinated you could face a hefty bill for tests, and then you've got to think about the cost of tests required when you return.”

Complicating matters are criss-crossing jurisdictions — the EU has a plan for a unified reopening, but member states, especially from tourist-dependent countries, have moved ahead more quickly. And for each international trip, there are rules for entry into the destination country and separate rules for leaving and getting back home.

The U.K., for example, has placed Singapore, Australia and New Zealand on its green list — but most Brits shouldn’t travel to those places because they won’t be allowed in. Likewise, Spain and Italy are allowing Brits to enter with just a negative Covid-19 test. But getting back from the amber-listed countries will require multiple Covid-19 tests and 10 days of isolation. This will make a holiday impractical or too expensive for many families.

Here’s a rundown of current rules for high-demand European and trans-Atlantic travel. Most Asian countries, along with Australia and New Zealand, are still mostly closed off to outsiders:

Travelers visiting the U.K. or returning after a trip are subject to quarantine unless they’re coming from one of the 12 nations and territories on the green list. Even then, multiple Covid-19 tests can add hundreds of pounds to the journey’s cost.

People from amber-listed countries can still get in, but the cost and restrictions will limit any comeback for the U.K.’s own tourism sector centered on historical sights in and around London.

Green-list arrivals must take a coronavirus test two days later at their own expense. For those on the amber list there's added test on day eight, plus self-quarantine for 10 days. People who come from red-list places are taken directly to a hotel for isolation.

Many green-listed places aren't letting Brits in. Portugal is the only EU country of note green-listed by the U.K., but Ryanair Holdings Plc Chief Executive Officer Michael O'Leary predicts that Italy and Greece will be added by the end of the month, followed by Spain in June.

There are also intra-U.K. restrictions, with Scotland now banning travel to English Covid-19 hotspots hit by the virus strain affecting India. The U.K. is not allowing people to enter who have been in or transited through red-list countries such as India, along with Brazil or South Africa, in the past 10 days, unless they are British or Irish nationals or U.K. residents.

Germany: Within the Zone

Germany, along with the U.K., provides more visitors to Europe’s beaches than any other nation. It loosened border curbs with member countries of the EU and the Schengen free-travel zone on May 13, giving its citizens access to more destinations than their British counterparts.

Fully vaccinated or recovered people no longer need a negative Covid-19 test and don't have to quarantine when they re-enter the country from those locations, removing a hurdle for Germans considering a holiday on the continent. Those who don’t meet those tests will, for now, still have to quarantine from designated risk zones, including all of Italy and Greece, as well as swaths of Spain.

Meanwhile, travel from so-called third countries like the post-Brexit U.K. remains severely restricted. People can only enter if they're residents of Germany, have an important role or if there is an urgent need to travel, such as life-or-death medical care. Starting Sunday, Brits will be subject to a two-week quarantine, even if they test negative.

Citizens from Australia, Israel, New Zealand, Singapore and Thailand can enter Europe’s biggest economy without restrictions. China, Hong Kong and Macau residents will also be allowed when Germans are granted equivalent entry rights, according to the interior ministry.

Italy, the European epicenter of the first coronavirus wave, has relaxed rules for tourists entering from abroad. Arrivals from most EU countries, Switzerland, the U.K. and Israel can avoid a 10-day quarantine with a certificate showing a negative coronavirus test no more than 48 hours before landing. Entry from San Marino and the Vatican City, microstates nestled within the Italian peninsula, is wholly unrestricted.

Travelers from countries including Japan, Canada and the U.S. face restrictions on movement, and must to isolate for 10 days. Most other tourists aren’t allowed to enter. Americans can get around the quarantine if they join certain Alitalia SpA,  Delta Air Lines Inc. and American Airlines Group Inc. flights between Rome and Milan on one end and New York’s John F. Kennedy International and Atlanta on the other, with Dallas Fort Worth potentially being added.

“For a long time we've only spoken about restrictions; now we're talking of reopening,” Italy's tourism minister, Massimo Garavaglia, said at an online event Friday. “We are confident it will be a great summer, now that foreign tourists can return.”

France allows entry from the EU and a handful of other countries, so long as people complete a form and receive a negative test within 72 hours before travel. Arrivals from seven nations including U.K., New Zealand and Japan must also self-isolate for a week.

Passengers from higher-risk countries including Argentina, India and South Africa must have a valid reason for travel, and may be required to take a second test, depending on the timing of the pre-flight screening. A 10-day quarantine is also mandatory.

A metropolitan curfew is still in place in France from 9 p.m. through 6 a.m. Residents are not allowed to travel outside of the EU or seven designated countries unless they meet a list of exemptions.

Spain and Greece Are Opening

From Monday, tourists from Japan and the U.K. can enter Spain without a PCR test. This should give a major boost for the country’s tourism sector, since Brits are its biggest source of visitors — but there’s a hitch. With Spain on the U.K.’s amber list, Brits will have to self-isolate once they get home. And there’s testing required on departure as well as return, which will quell some of the enthusiasm.

Some EU and European Economic Area arrivals can also go to Spain without a test, along with people from Australia, China and Hong Kong — places that are also mostly shut off. Arrivals from the bulk of EU countries, including Germany, Ireland, and France, must take a test. The list is reviewed every two weeks. Those entering Spain from India must quarantine for 10 days, a period that can be shortened with a negative test result on the seventh day.

Entry to Spain will get easier from June 7, when those vaccinated with EU or WHO approved shots will be welcomed and can travel around the country freely.

For Greece, travelers from the EU and Schengen Area can enter without self-isolating as long as they can prove they’ve taken a negative PCR test within 72 hours of arrival. The test isn’t required for those who have completed their vaccinations, or recovered in the past nine months, and can show proof.

Other countries that are allowed to enter Greece under the same conditions include the U.S., the U.K., Russia, and Canada. A full list can be found here.

Airlines rushed capacity into Portugal after the U.K. put it on the green list earlier this month. Tourists from U.K., EU and Schengen Area countries can go as long as long as they present proof of a negative test, carried out 72 hours or less before the flight.

People from countries with high Covid-19 incidence rates of 500 cases or more per 100,000 inhabitants over the past two weeks can only make essential trips and must to quarantine for 14 days at home or a location chosen by the health authority. The list includes South Africa, Brazil, India, Cyprus, Croatia, Lithuania, the Netherlands and Sweden, though it doesn’t include people who have made airport stopovers in those places.

Trans-Atlantic travel has begun to open up, but so far it's very much a one-way street, with Americans able to fly to some European countries from the U.S. but no reciprocal arrangements in place.

Under a presidential decree issued by Joe Biden just after he took office, entry to the U.S. is denied to anyone who in the previous 14 days has been in the U.K. or Schengen Area, which includes 22 EU members plus a number of other places like Norway, Iceland and Switzerland. There’s an exception for U.S. citizens, permanent residents and their families, so Americans can return home with ease if they can get to the destination country.

To enter the U.K., amber-listed arrivals from the U.S. must self-isolate for 10 days. There's some expectation that the U.S. may soon be added to the green list, with momentum building toward a bilateral accord in the run-up to the G7 meeting in England next month.

Americans can travel to parts of continental Europe without the need isolate, generally on the same basis as visitors from within the region. Those spots include Greece and certain flights to Italy, as well as Iceland and Cyprus. France will join the list on June 9, while strong restrictions still apply to Germany, Portugal, the Netherlands and Ireland.

Meanwhile, the EU’s move to work toward a more comprehensive reopening for vaccinated visitors from outside the bloc will favor Americans, given the rapid U.S. rollout of shots, together with people from the U.K., and the United Arab Emirates.

The unvaccinated could potentially get in too if the U.S. is added to an EU “white list” that currently features eight countries, including New Zealand and Israel, with low Covid-19 rates. Getting added isn’t certain: Talks on the matter stalled, and the list's publication may be postponed for two weeks, Bloomberg reported last week, citing diplomats familiar with the debate.