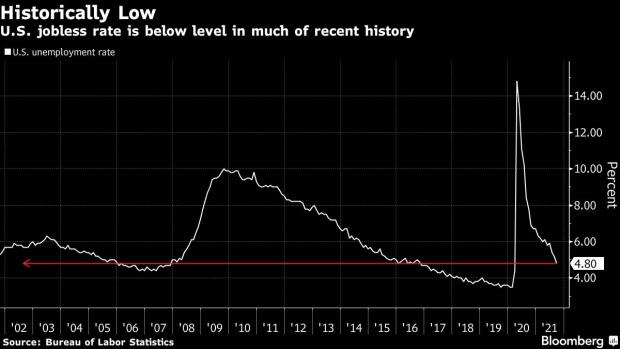 (Bloomberg) -- Former U.S. Treasury Secretary Lawrence Summers said that it’s “preposterous” to argue there are labor shortages in the U.S., and reiterated that the economy is more vulnerable to inflation than many realize.

Summers noted the current unemployement rate of 4.8% is lower that through much of recent U.S. history. He said many people exited the workforce for reasons including the coronavirus changing how they want to live their lives, pandemic-relief packages providing them with extra savings and Covid-19’s spread leaving them with continuing health concerns.

Summers, a paid contributor to Bloomberg, said the tightening labor market was among the reasons he’s been worried about inflation and said investors are now increasingly sharing that view.

Summers also said it was “dangerous and misguided” for lawmakers and businesses to oppose any increase in corporate taxes.

With the Federal Reserve this week introducing new limits on its senior officials trading stocks and bonds, Summers said the central bank needed to do some “soul searching” over its ethics rules.

Two regional Fed bank presidents resigned in recent weeks following revelations of unusual trading in 2020 that was cleared by lawyers within their institutions.

“There’s a lot of work to do at the Fed looking over ethical issues,” Summers said.