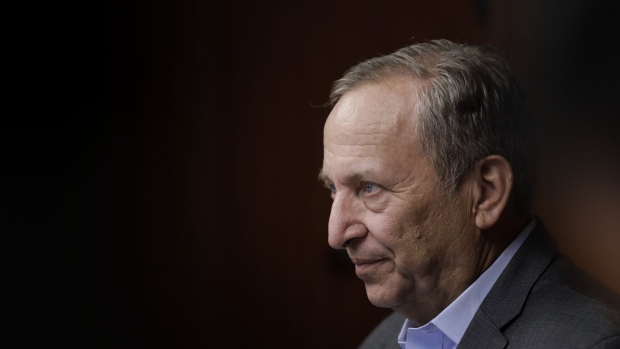 Lawrence "Larry" Summers, former U.S. Treasury secretary, listens during a question-and-answer session with the media at a workshop hosted by the Bank of Japan (BOJ) and the Bank of Canada (BOC) at the BOJ headquarters in Tokyo, Japan, on Friday, Sept. 30, 2016. The new BOJ policy framework is headed in the right direction, Summers said at the event. Photographer: Kiyoshi Ota/Bloomberg , Bloomberg

Former US Treasury Secretary Lawrence Summers urged supporters of modern monetary theory -- a heterodox economic school that argues governments can spend more than they think without spurring runaway inflation -- to look at the troubles such thinking has produced in Turkey.

Summers spoke hours after Turkey’s central bank delivered a shock reduction in interest rates despite inflation soaring to a 24-year high and the lira trading near a record low.

Erdogan has championed central bank rates to keep down borrowing costs, arguing that that’s the route to tempering inflation. Juiced up by ultra-loose monetary policy, Turkey’s $800 billion economy blazed ahead at a record pace when it emerged from the pandemic and has continued to expand at one of the fastest rates in the Group of 20.

But inflation is galloping near an annual rate of 80%.

“I hope that the misguided acolytes of modern monetary theory in the United States are watching,” said Summers, a Harvard University professor and paid contributor to Bloomberg Television.