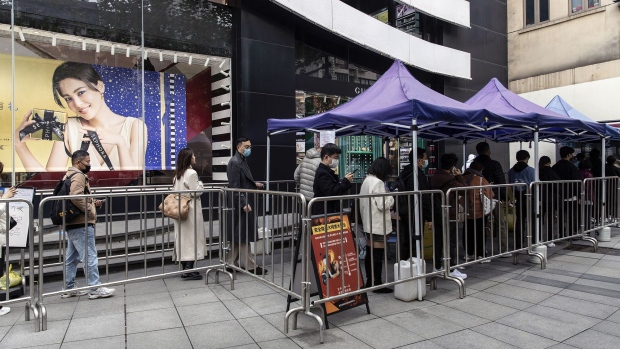 “We don’t yet know how this is going to work out,” Summers told Bloomberg Television’s “Wall Street Week” with David Westin. “Is this going to be a successful rejoining of the reality of the rest of the world? Or is this going to lead to catastrophic, de-legitimizing performance of the Chinese health-care system?”

China’s health authorities on Wednesday announced 10 new measures for dealing with Covid-19, moving definitively away with its previous approach focused on widespread lockdowns and centralized quarantine facilities. Officials were told to limit the designation of high-risk areas, rather than applying measures to an entire neighborhood.

“We’re going to be seeing probably the biggest set of policy experiments that we’ve seen in China in decades,” said Summers, a Harvard University professor and paid contributor to Bloomberg Television.

Economists have been boosting their forecasts for China’s economic growth in 2023 in light of the more aggressive dismantling of pandemic strictures. JPMorgan Chase & Co. economists said Thursday that an expansion of around 5% would be “achievable” with a well-handled reopening.

Not only will Chinese authorities be implementing the new approach toward Covid-19, but Beijing will also be completing the leadership overhaul that began with the October Communist Party congress. The premier and cabinet, or State Council, are set to change in March.

“There’s a big chance that China’s going to be a quite different country six months from now than it is today,” Summers said.

The former Treasury chief ascribed an influential role to last month’s street protests in persuading policymakers to shift toward a more rapid move away from Covid Zero.

“A big change in China happened because of an expression of popular will and protests,” Summers said. “That’s a profound thing for the governance of that superpower with 1.4 billion people.”

Another trend that’s important to monitor, Summers said, is the emergence of ChatGPT, a new artificial-intelligence driven program. It can read and analyze masses of text and is designed to find patterns in a dataset without being given labeled examples or explicit instructions about what to look for.

This “can become a source of cohesion and progress,” but there’s also negative potential, he said. While the Industrial Revolution brought “extraordinarily positive things,” it also contributed to the “carnage and catastrophe of the first half of the 20th century,” he said.

(Updates with further comment on ChatGPT in final paragraph.)