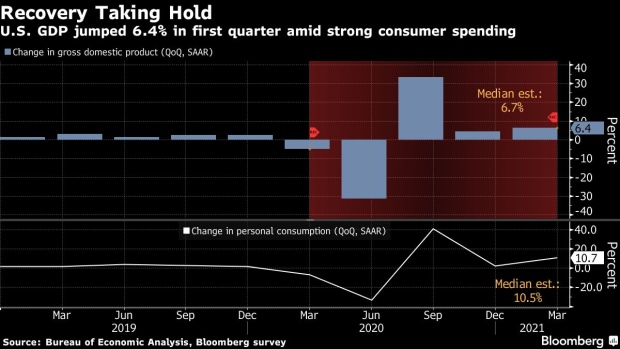 (Bloomberg) -- President Joe Biden’s $4 trillion plans to overhaul the role of government in American lives is aimed at the right targets but risks inflation in an economy that’s recovering fast from the pandemic, said former U.S. Treasury Secretary Lawrence Summers.

“I am concerned that progressives have a tendency to overreach,” Summers said in an interview with David Westin on Bloomberg Television’s “Wall Street Week.” “You need to be progressive but you also need to get the arithmetic right, and I am worried that this program could overheat the economy.”

Summers, who’s a paid contributor to Bloomberg, said there was rising evidence of labor shortages and that “workers are quitting at rates they usually quit at during booms,” which made him concerned about inflation.

Data on Friday showed that a key measure of consumer prices -- known as the personal consumption expenditure price index that the Federal Reserve uses for its 2% inflation target -- rose 2.3% in March from a year earlier, the biggest gain since 2018. The so-called core PCE price index, which excludes volatile food and energy costs, climbed 1.8% after a 1.4% gain in February.

Fed Chair Jerome Powell has repeatedly cautioned investors to expect inflation to rise above 2% this year as the economy reopens. He did so again Wednesday when asked directly about the concerns that Summers has raised in recent weeks about overheating.

“Those pressures are likely to be temporary as they are associated with the reopening process,” he said. “An episode of one-time price increases as the economy reopens is not the same thing as, and is not likely to lead to persistently higher year-over-year inflation into the future,” he told a press conference after the Fed held interest rates near zero.

Powell also played down the risk from worker scarcity, noting that wages have yet to move up in the way you’d expect in a really tight labor market, while the experience from the last expansion was that people would rejoin the labor force, particularly as pay rises or unemployment benefits run out, as they will in September.

“If you were worried about running out of workers, it seemed like we never did,” Powell said. “My guess would be that you will see people coming back into the labor force.”

Summers said he hoped that Powell’s assessment on the temporary nature of higher prices was correct.