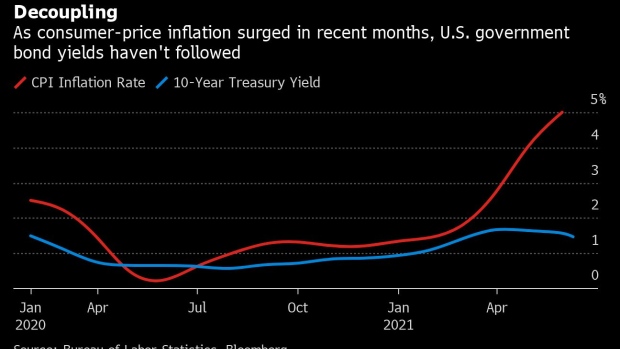 Larry Summers, former U.S. Treasury secretary, listens during the New Work Summit in Half Moon Bay, California, U.S., on Tuesday, Feb. 26, 2019. The event gathers powerful leaders to assess the opportunities and risks that are now emerging as artificial intelligence accelerates its transformation across industries. , Bloomberg

(Bloomberg) -- Former U.S. Treasury Secretary Lawrence Summers said he didn’t expect the recent fall in bond yields although he maintained his view that the economy is overheating.

“I didn’t anticipate the kind of decline in nominal yields that we’ve seen,” Summers told “Wall Street Week” with David Westin on Bloomberg Television. “I’m surprised. I would have expected that yields would have risen more.”

The yield on the key 10-year Treasury note fell to a three-month low of 1.43% on Thursday even after the government reported the consumer price index surged 5% in May from the previous year, the most since 2008. It ended Friday at 1.45%. Borrowing costs typically rise when inflation fears mount.

Summers, a paid contributor to Bloomberg, said the cheaper yields likely reflected a mixture of factors including bets the Federal Reserve is focused more on reducing unemployment than inflation, and that money is flowing into U.S. markets from abroad.

“People think the Fed is just about the unemployment, not about the inflationary pressure so they take down their views about interest rates,” he said.

Still, he predicted CPI would end the year advancing more than 4% on an annual basis. Faster inflation also meant so-called real interest rates had fallen even as the economy surged, he said.

“Monetary policy has been getting steadily easier through this year even as the economy’s booming,” Summers said. “That defies good sense.”

While some economists, including many officials at the Fed, argue the recent price pressures are driven by short-term factors such as the reopening of the economy, Summers repeated he is worried by overheating.

He noted rapid expansion in the economy and consumer demand, reports of labor shortages, a housing market that’s “on fire” and the warnings of company purchasing managers as reasons to worry.

“It’s going to lead to problems and the sooner we recognize that, the better it will be,” he said.