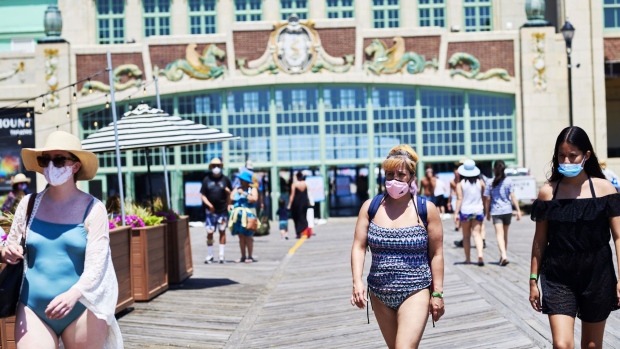 The virus is the summer house guest from hell.

Any remaining hope that the coronavirus that’s pushed the U.S., Europe and much of Asia into historic economic downturns would take a holiday was all but crushed this week. The virus continues to rampage through parts of the U.S. and engulf nations across the developing world, particularly India, Brazil and South Africa. It’s made a comeback in Japan as well as areas of Europe and China.

At its current pace of about 250,000 or so new cases a day, there could be well more than 50 million infections worldwide by the end of 2020. As for fatalities from the pandemic, “we’ll go well over a million,” Eric Topol, director of the Scripps Research Translational Institute in California, estimated in mid-June. There are currently about 674,000 coronavirus deaths globally, according to Johns Hopkins University data.

The time until the release of a safe and effective vaccine will be very challenging, with countries like the U.S. and Brazil potentially leading the way in severity, said Michael Osterholm, director of the Center for Infectious Disease Research and Policy at the University of Minnesota. The same type of surge in daily cases that took place in the U.S. around the Memorial Day holiday could be repeated around Labor Day, when schools reopen, he said.

“I think we’ll see a substantial increase in transmission that’s going to spill over into more adults and at-risk people,” he said. “And then that gets us into the beginning of flu season, when transmission is potentially enhanced by all the indoor activity. If you add that all up together it’s not a pretty picture.”

At the same time, as governments face new flare-ups and reimpose full or partial lockdowns, the prospects for a brisk global economic rebound later in the year have dimmed, according to economists and executives.

While the virus-stricken world is in a better place than in April and May, when near-total lockdowns to prevent virus spread delivered a savage economic hit, the continuing emergence of new hotspots, or sudden outbreaks in old ones, has disrupted economic activity just enough to slow momentum toward a robust recovery.

High-frequency data that track indicators such as restaurant bookings and job postings have been flat or trended downward in some economies. The highly transmissible virus is expected to remain a formidable and elusive adversary until a first generation of effective vaccines can be rolled out to the public, which many experts expect in 2021.

In the U.S., Federal Reserve Chairman Jerome Powell this week said an “increase in virus cases and the renewed measures to control it are starting to weigh on economic activity,” pointing to signs of lower consumer spending, based on debit- and credit-card use and weakening labor-market indicators in the small-business sector.

On Thursday, the U.S. announced that its economy contracted at a 32.9% pace from April through June, one of the biggest drops on record. As bad as that was, it was already baked into market expectations.

More worrisome to some was that the number of Americans filing first-time unemployment claims rose for the second week in a row just as emergency benefits to about 30 million jobless people were set to expire at the end of July. Congress is divided on whether to extend, and by how much, enhanced unemployment benefits and direct payments to Americans.

Other parts of the world, which seemed to have the virus under control, continue to confront new outbreaks. China has seen infections surge in the northwestern region of Xinjiang. The U.K. has reintroduced restrictions to parts of northern England after a new flurry of cases, only weeks after it started to reopen.

The resurgence of infections across Europe has prompted governments to impose new travel and social restrictions, such as the U.K.’s quarantine for all travelers from Spain, where cases have surged. France, Belgium, Germany and other countries have seen worrying upticks as well.

While jobless benefits are on balance more generous in Europe than the U.S., the economic pain seems likely to deepen in the euro area. Joblessness in the region could hit almost 10% by the end of the year as the economy slumps, according to a Bloomberg survey. In the U.K., unemployment is forecast to reach 8%, more than double its level in the previous year.

Goldman Sachs Group Inc., meanwhile, warned that Asia-Pacific economies, which accounted for more than 70% of global growth in 2019, passed a major inflection point in June when the pace of the region’s reopening “slowed materially,” and significant challenges loom.

“While the early restart has looked like a ‘V’ in many places, and third-quarter GDP growth will be robust given the comparison with a very weak second quarter, normalization is apt to be slower from here,” according to Andrew Tilton, Goldman’s chief economist in the region.

The corporate pain from the pandemic remains fierce, particularly in the U.S., where more than 160 companies have declared bankruptcy.

From retailers and airlines to restaurants and fitness centers, the carnage has included some well-known names such as Hertz Global Holdings Inc., J.C. Penney Co. and Ascena Retail Group Inc., owner of the Ann Taylor and Lane Bryant apparel chains.

As of the end of July, with more than half of the Standard & Poor’s 500 companies having reported so far, earnings have fallen by about 33% from the year-earlier period, according to data compiled by Bloomberg. General Motors Co., General Electric Co., Starbucks Corp. and Nike Inc. are among the first-tier companies that have reported losses.

Cue the Lightning, This Earnings Disaster Movie Isn’t Over Yet

Corporate leaders also see evidence that U.S. demand has sputtered after a recent uptick in Covid-19 cases that started in June. “While we were encouraged by the early signs of recovery, the past few weeks demonstrate the trajectory may be uneven,” Boeing Co. Chief Executive Officer David Calhoun said this week.

Thanks to government subsidies and programs, far fewer European companies have fallen into bankruptcy court. However, in recent weeks Airbus SE, Commerzbank AG and Burberry Group Plc were among major companies to signal actual or possible staff cuts.

On Friday, the Dutch arm of Air France-KLM said it will cut 4,500 to 5,000 positions ranging from pilots to cabin crew and ground staff this year and next. The pandemic has wiped out the airline’s efforts to pay down debt.

“As a kind of tsunami, the entire corona crisis is now washing it away,” said KLM CEO Pieter Elbers on a call. “Cry and start over, is how it feels,” he said.