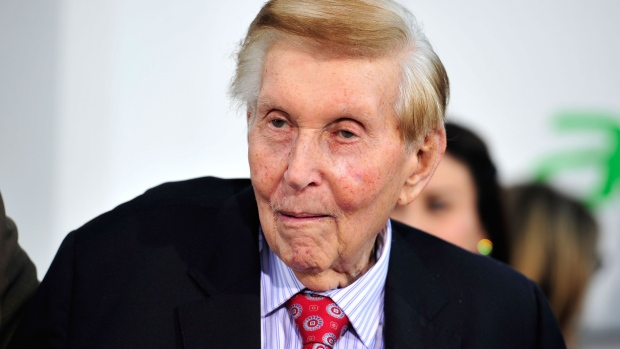 Sumner Redstone, the swashbuckling billionaire who built what is now ViacomCBS Inc., died on Tuesday at 97. He used to say that he would never have a legacy because he planned to live forever.

News reports would qualify it as a joke, though with Redstone no one could be entirely sure. His hard-charging leadership style and dealmaking were of a bygone era, but he earned a legacy even if he didn’t want one: It lives on in the outsize personalities who wield singular control of their companies such as Elon Musk, Mark Zuckerberg and Jeff Bezos.

They are perhaps this generation’s Redstones, albeit a water-downed version of the cast of characters that ran the media world in its heyday. Redstone would have relished the opportunity to try to outwit any one of them.

The Boston native became a media mogul at an age when most are retiring. A gruesome near-death experience in a Boston hotel fire in 1979 fortified his survivor mentality, which underpinned every business move he made. “Winning is everything,” he said while taking a break from a tennis match in 1999 at the industry’s annual summit in Sun Valley, Idaho, terrain Redstone once ruled alongside rivals Rupert Murdoch, Barry Diller and John Malone.

Redstone’s grit and stubbornness were legendary, as were his wrath — ask any of his banished successors along the way — and wry sense of humor. “Legacies are for dead people,” he would say. And well into his 90s, when he was bedridden and no longer able to speak, an iPad was reportedly programmed to give the three responses only he would need: “Yes,” “no” and and a curt vulgar dismissal. Logan Roy, the central character in the HBO hit series “Succession,” is said to be inspired by Redstone and Murdoch.

By 2000, Redstone had turned his family’s drive-in movie-theater chain into the second-biggest U.S. media conglomerate, following a takeover of CBS for some $50 billion and an earlier victory in the bitter battle to buy Paramount Pictures.

When Redstone split up Viacom and CBS again in 2006, the reasons were as ego-driven as they were business-minded, handing his two favorite deputies each a company to run. That decision ultimately  led to his empire’s vicissitudes of fortune.

Philippe Dauman, a trusted Redstone ally, oversaw the decline of Paramount and Viacom’s cable networks, including MTV, which eventually resulted in his dramatic 2016 ouster. Leslie Moonves, who was put at the helm of CBS and made the network into the television-ratings envy of the industry, was brought down in 2018 by numerous sexual-misconduct allegations amid the #MeToo movement.

The drama extended to his family. Shari Redstone, who took over eventually, and her father were known to have a hot-and-cold relationship, and her ascension wasn’t a typical handing down of the family business.

The elder Redstone publicly accused his daughter of a power grab at one point. Ugly legal battles ensued questioning his mental soundness and the legitimacy of her asserting control. The events unfolded publicly for years in tabloid pages.

In the end, Shari Redstone got her way: Viacom and CBS’s management was replaced, the companies were merged and she became chairman. But her instinct that they needed more scale to compete was also right.  The newly named ViacomCBS Inc. is now fighting to hang on in the streaming wars, trying not to get stomped on by Netflix Inc., Walt Disney Co., Amazon.com Inc. and Google.

The CEO who now leads ViacomCBS, Bob Bakish, who was installed by Shari Redstone, is almost the antithesis of her father. He’s a no-nonsense, roll-up-your-sleeves manager and isn’t much for schmoozing or press attention.

In fact, that’s true of other appointees in what has started to be a year of mass turnover in the media industry. AT&T Inc., a once prosaic phone company that now competes in Hollywood and streaming through its ownership of Warner Bros. and HBO, selected John Stankey, a career AT&T executive, to be its new CEO beginning last month. Meanwhile at Disney, Bob Chapek, a mostly behind-the-scenes figure who ran the theme parks business, replaced the larger-than-life Bob Iger as CEO in February. Instead, Redstone’s presence is better reflected in the technology sphere, where the billionaires behind highflying companies have evaded their boards’ leash and charged ahead defiantly in their strategies.

ViacomCBS isn’t what it once was, but Bakish and his team are working to make it a serious contender in streaming — and it has a real shot, even as Covid-19 hurts film and cable-TV businesses like Viacom’s. Analysts and investors over the years have often wrongly predicted the end of the company, or that it would be sold off in pieces or swallowed whole by a deep-pocketed tech giant. Redstone had a button just for them.