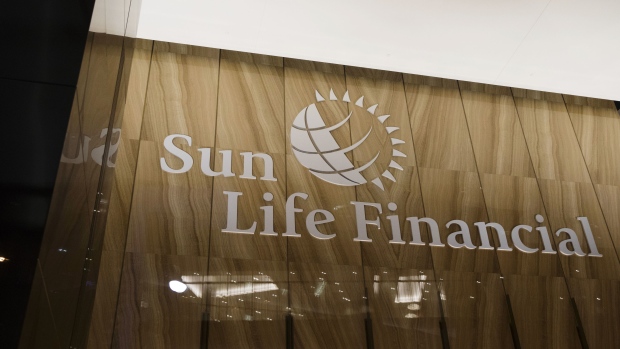 Signage is displayed inside the Sun Life Financial Inc. headquarters in Toronto, Ontario, Canada, on Sunday, Aug. 11, 2019. Sun Life reached its lowest ever coupon for any of its bonds with the issuance of its first sustainable notes in a fresh sign that demand for such debt is increasingly driven by general investors scratching for some yield above inflation. Photographer: Brent Lewin/Bloomberg , Bloomberg

Other firms weighing an offer include closely-held FTLife Insurance Co., the people said, asking not to be identified because the matter is private. The insurer is owned by an arm of Hong Kong’s New World Development Co., the billionaire Cheng family’s conglomerate.

Dah Sing is working with an adviser to pursue a so-called bancassurance partnership after it terminated an agreement with Tahoe Life Insurance Co., Bloomberg News has reported. A deal, which could be worth a few hundred million dollars, could draw interest from other insurers seeking to expand in the territory, people familiar with the matter have said.

Non-binding offers for the partnership are expected as early as this week, the people said. Considerations are ongoing, the companies could decide against pursuing a deal and other bidders could also emerge, the people said.

“A bancassurance partnership with Dah Sing is compelling because of its growth potential in Macau,” said Bloomberg Intelligence analyst Steven Lam. “The deal could make sense for any of them, so we may be poised to see a bidding war.”

Dah Sing provides banking, insurance and other financial services in Hong Kong, Macau and mainland China, according to its website. In July, Japan’s Norinchukin Bank bought about 10% of Dah Sing from Mitsubishi UFJ Financial Group as part of a business tie-up. Shares of the Hong Kong financial services group have dropped 23% this year, valuing the firm at about $736 million.