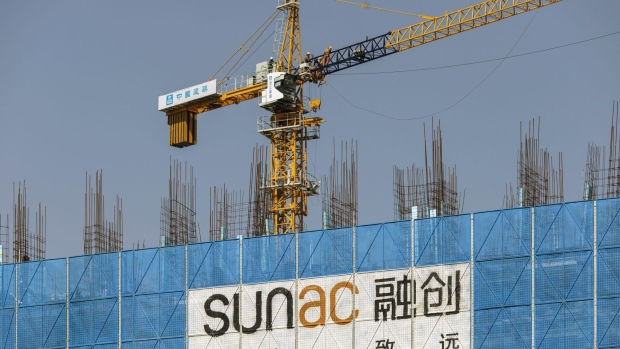 Signage at the construction site of the Sunac Resort project, developed by Sunac China Holdings Ltd., in Haiyan, Zhejiang Province, China, on Friday, Feb. 25, 2022. A widely-anticipated push by China's government to boost construction in order to stabilize growth in the world's second-largest economy has yet to materialize, a blow to hopes that Chinese stimulus would lift global growth early on this year. Photographer: Qilai Shen/Bloomberg , Bloomberg

The company proposed to convert as much as $4 billion of its $9.1 billion in offshore debt into ordinary shares or equity-linked instruments, a Hong Kong stock exchange filing showed on Friday. The rest will be exchanged into new dollar bonds with maturities ranging from two to eight years. Interest payments won’t be made in the first two years.

China’s 10th-largest builder by contracted sales is still in discussions with an ad hoc group of creditors, and no definitive agreement has been reached. Such creditors control more than 30% of its existing debts, Sunac said.

“Sunac could face difficulty getting approval from offshore creditors for its proposal,” Bloomberg Intelligence analysts including Kristy Hung wrote in a note. “Stabilizing the company’s liquidity might be hard as revenue has been hit by prospective homebuyers’ fear of non-completion of projects.”

Chinese builders including Sunac fell into distress during a property slump that’s hurt the world’s second-largest economy and prompted regulators to formulate a sweeping rescue plan for the industry. Shares of developers rallied Friday after Bloomberg reported that authorities may further soften their stance on property at a key economic meeting next week.

Sunac earlier struggled to get creditors on board with a preliminary restructuring plan, Bloomberg reported last month. Under that proposal, the company was seeking to swap about 40% of its offshore bonds into the firm’s Hong Kong-listed shares and extend the remaining public and private offshore bonds by as much as seven years, with principal repaid in installments.

The developer is also working on a restructuring plan for its onshore bonds. Its domestic unit earlier this week offered to shorten the period it is proposing to extend such notes, Bloomberg reported.

Sunac’s efforts come as China Evergrande Group, the developer at the epicenter of the property crisis, prepares to meet with a group of dollar bondholders Friday to formally discuss a debt restructuring proposal, Bloomberg reported. Both Evergrande and Sunac face winding-up lawsuits in Hong Kong that have been adjourned to next year.

Sunac also released delayed 2021 earnings on Friday, reporting a core loss of 25 billion yuan ($3.6 billion), versus a core profit of 30 billion yuan a year earlier. The firm expects to generate 320 billion yuan cash flow over the next seven years, from which about 20% could be available for offshore entities.

Shares of Sunac have been suspended since April 1, and will remain halted until further notice, it said. The stock tumbled 61% in the first three months of 2022. The firm’s dollar bonds remained largely unchanged Friday, priced at about 17 cents on the dollar.

If the stock resumes trading, Sunac’s $3.2 billion market cap could shrink 34% if it drops in line with distressed peers’ average, BI’s Hung said. Its efforts to sell assets could also face roadblocks from hidden risks and potential due diligence work, she added.

--With assistance from Yuling Yang.

(Updates with analyst comments in fourth and last paragraphs)