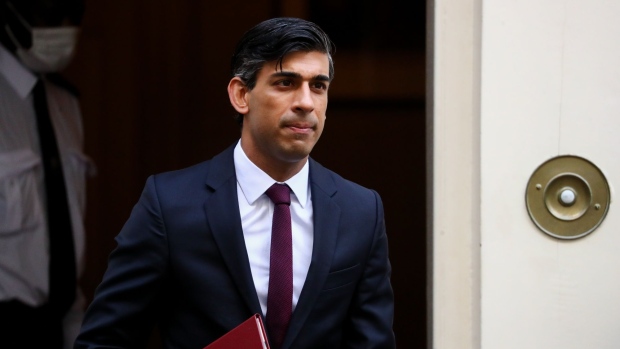 Rishi Sunak, U.K. chancellor of the exchequer, departs number 11 Downing Street on his way to present his 'Winter Economy Plan' at Parliament in London, U.K., on Thursday, Sept. 24, 2020. Sunak will set out a new crisis plan to protect jobs and rescue businesses as the coronavirus outbreak forces the U.K. to return to emergency measures. , Bloomberg

(Bloomberg) -- Chancellor of the Exchequer Rishi Sunak is exploring ways to cut the U.K. tax burden as he seeks to deliver on an ambition spelled out in the budget in October for taxes to be going down by the next election.

The chancellor commissioned a review of options from Treasury officials, and they’ve come back with a list of possible measures, including cuts to income tax and value added tax, according to a person familiar with the matter, who spoke anonymously about policy that’s still in an exploratory stage.

Sunak is seeking to restore the Conservatives’ image as the party of lower taxation after his efforts to restore order to the public finances and hold to government spending promises in the wake of the coronavirus pandemic instead saw him raising the U.K. tax burden to its highest since the 1950s.

But at the budget in October, Sunak said that by the next election, due by 2024, he wants “taxes to be going down not up.”

The Times on Saturday said Sunak’s preference is to cut income tax by 2 pence in the pound over the next three years. It reported that an alternative would be to reduce the headline 20% rate of VAT, and that the Tories are also debating scrapping the top income tax rate of 45%., which currently applies to earnings above 150,000 pounds ($199,000) a year.

Other options being examined include raising the threshold for inheritance tax, and lowering VAT rates for householders using green energy, according to the Times.

But the person familiar pushed back against the notion that Sunak has any favored options, saying the plans are in their very early stages, and there are no guarantees, because of the economic uncertainty amid the ongoing pandemic.

The Treasury said in a statement that the tax system is kept “under constant review.”

“As the chancellor made clear at the budget, by the end of this Parliament we want taxes to be going down not up,” the Treasury said. “We do not comment on speculation about specific tax changes.”