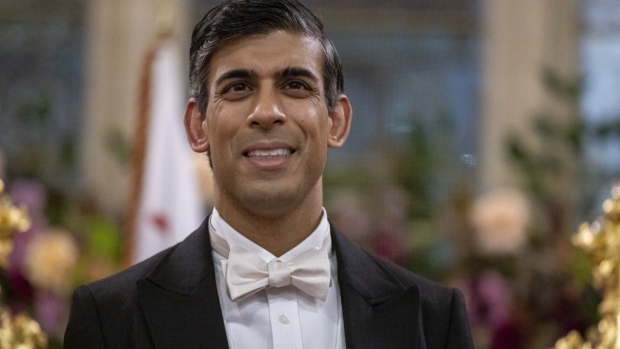 Rishi Sunak, UK prime minister, speaks at the Lord Mayor's Banquet at the Guildhall in the City of London, UK, on Monday, Nov. 28, 2022. In his first major foreign policy speech as premier, Sunak will draw a clear line under the much-vaunted "golden era" of UK-China relations pursued by former Prime Minister David Cameron, a fellow Conservative. , Bloomberg

(Bloomberg) -- UK Prime Minister Rishi Sunak dropped plans to impose mandatory housebuilding targets on local councils in a major climbdown in the face of a brewing rebellion by Conservative members of Parliament.

Levelling Up Secretary Michael Gove said in a statement late Monday that the government will consult on how housing goals can “better take account of local density.” He also agreed with the Tory rebels led by Theresa Villiers and Bob Seely to make the targets “advisory” rather than compulsory, Seely said on Monday on Twitter. Villiers told Bloomberg that councils facing “genuine constraints” would be able to reduce their goals.

“If we are to deliver the new homes this country needs, new development must have the support of local communities,” Gove said. He said the government is “strengthening” a commitment “to build the right homes in the right places and put local people at the heart of decision-making.”

The climbdown on a flagship piece of legislation demonstrates how Sunak is beholden to his backbenchers despite enjoying a majority of 69 in the House of Commons, especially as he seeks to restore a degree of calm to government after a year in which the ruling Tories ousted two prime ministers.

The rebels had threatened to try to derail the government’s Levelling Up bill, a cornerstone of the party’s commitment in the 2019 general election to improve opportunities for people across Britain. While they would have been unlikely to succeed because the opposition Labour Party had indicated support for government efforts to boost housing supply, the concession will be seen as a choice to prioritize party unity and to avoid the embarrassment of relying on opposition votes.

“This is all part of the normal process of taking a bill through Parliament,” government minister Nick Gibb told Sky News on Tuesday. “You need to work with parliamentarians.”

Gove said local people need to be reassured about the requirement for new housing to be “beautiful, accompanied by the right infrastructure, approved democratically” and for “proper neighborhoods” to be created.

He said brownfield land will be prioritized for development and that local authorities won’t be required to review greenfield land for potential housebuilding opportunities.

He also asked the Competition and Markets Authority to “consider” undertaking a market study on housebuilding to ensure the industry is competitive. Moreover, Gove’s department said it’s considering new financial penalties for developers that fail to build housing despite having planning approval.

In their election manifesto, the Tories promised to build 300,000 new homes a year -- though the government has so far fallen well short of that target. Gove’s now-abandoned plan to assign localized targets was seen by the government as a way of eventually reaching the broader goal.

The watering down of the policy comes in the face of an outcry from dozens of Tory backbenchers who were worried about disruption caused by large numbers of new homes being built in their typically leafy, southern constituencies.

“The compromise we have secured shows that positive change can be achieved through backbench scrutiny of legislation,” Villiers said.

The government is separately under pressure from a different group of Tory rebels, who want to amend the Levelling Up Bill to end an effective ban on building new onshore wind farms.

They are led by former Cabinet minister Simon Clarke and include former premiers Boris Johnson and Liz Truss, who are hoping to force a government U-turn to allow more wind turbines to be built. Gibb said talks with these rebels are ongoing.