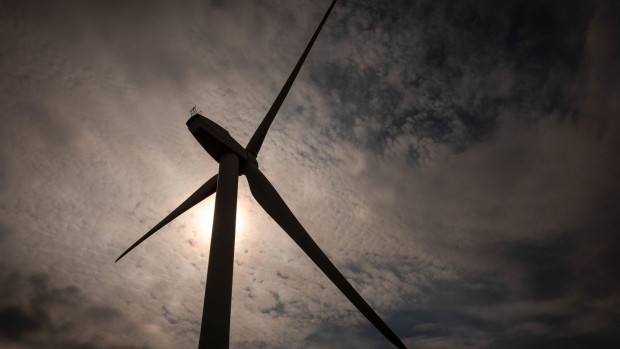 (Bloomberg) -- One of Rishi Sunak’s senior Cabinet ministers hinted his government could drop an effective ban on new onshore wind farms, amid growing calls for a U-turn from members of his ruling Conservative Party.

Given the opposition Labour Party supports lifting the ban, the Tory rebel numbers are approaching levels where the government faces a potentially damaging defeat at a sensitive time. Even with a working parliamentary majority of 69, the UK’s new premier is finding the Conservative Party divided to the point of being unmanageable on a range of policy issues.

If Sunak does back down on the Levelling-Up and Regeneration Bill, it would be the second reversal in less than a week on the same legislation, after dozens of Tories threatened to defy him over housebuilding targets.

On Monday, Business Secretary Grant Shapps said there isn’t a “massive gulf” between the government and the Tory rebels. “We’re all basically saying the same thing,” he told Times Radio. “You need local consent if you’re going to have wind power onshore, because it can be quite a big imposition.”

Sunak’s spokesman, Max Blain, tried to downplay Shapps’s hint of compromise, saying talks are ongoing between the government and rebels.

But Blain also declined to confirm a vote on onshore wind will be held before Dec. 20, suggesting Sunak may push the issue into the New Year if he can’t find a suitable solution that does the least possible political damage.

The prime minister has talked “about bringing people with us when we transition to net zero,” Blain told reporters on Monday, referring to the government’s climate goals. “He said the worst thing we can do is alienate communities when we deliver on our commitments and we have a very affordable form of energy in offshore which is creating jobs in the country.”

But it’s an example of the challenges facing Sunak, who also shows little sign of being able to reverse the dire poll numbers. Facing such bleak prospects, at least nine Tory MPs have already said they won’t contest the next general election, due in January 2025 at the latest.

The regeneration bill illustrates the degree of faction-fighting now dominating the ruling party. The ban on new onshore wind farms was actually a policy of Johnson’s administration, though the former prime minister is now causing political trouble for Sunak by backing the rebel bid to lift it. The legislation he’s seeking to amend also dates from his tenure.

Sunak’s Plea for Patience Leaves Him Under Constant Attack

During the Tory leadership election campaign in the summer -- which he lost to Truss -- Sunak said he would keep the ban and pursue offshore wind due to the “distress and disruption” onshore wind farms can cause to local residents. His spokeswoman declined to comment on Monday.

If Sunak does climb down, the government is likely to argue that shifting circumstances and rising energy costs due to Russia’s war in Ukraine have changed the calculations. But the problem is it would foster the sense that he is being buffeted by political winds rather than shaping them. He would also risk alienating a large swathe of Tories who still oppose onshore wind.

After more than 12 years in power, it is the broader Conservative Party that appears too divided to define itself, including on previously totemic issues.

Even the Cabinet minister in charge of the legislation, Michael Gove, expressed support in March for more onshore wind power. Tory MP Alok Sharma, who was president of the COP26 climate summit, has also backed changing the bill.

“Boris Johnson famously used to call wind turbines the white, satanic mills of the north of England when they were building them all over my constituency,” former party chairman Jake Berry, who represents a district in Lancashire, northern England, told the BBC on Sunday. “He’s changed his mind on them. I, to a large extent, have changed my mind.”

(Updates with comments from Sunak’s spokesman from sixth paragraph)