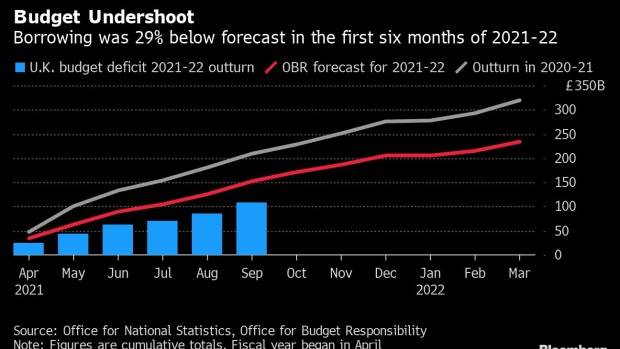 The fiscal and monetary double act that got the U.K. through the pandemic is coming to end, leaving Rishi Sunak to go it alone with dwindling resources to bolster the recovery.

During his 20 months in office, the chancellor of the exchequer has coordinated an unprecedented stimulus program involving both the Treasury and the Bank of England. The two came together to unleash hundreds of billions of pound of support for the economy, winning international plaudits for the speed and scale of the interventions.

Now, as Sunak prepares for his budget on Oct. 27, all the signs are that both the guardians of the U.K. economy are winding down their largess. That will deliver a simultaneous clampdown for both monetary and fiscal stimulus, reducing the scope Sunak has to spur growth at the moment that the economy is losing momentum.

“Difficult decisions await Rishi Sunak,” said Alison Ring, public sector director at the Institute of Chartered Accountants in England and Wales, noting he’ll have to juggle rising demands from health, education and pensioners for support with limited capacity to help.

That situation has some analysts concerned about the fate of the recovery. For Sunak, the more immediate concern is that a rise in interest rates from the central bank would push up the cost of servicing government debt, which is already climbing thanks to a spike in inflation. On Sunday, Sunak said he was alive to that danger.

“The risk of inflation and interest rates is one that we can see already today, and there might be other things that we don’t know about,” Sunak told Times Radio. “I have to think about what might happen to us in the future and build into our plans some resilience to cope with that uncertainty or the potential adverse shocks that come our way.”

“The U.K. budget will take place against a backdrop of soaring inflation and expectations of higher interest rates. That makes it highly likely Chancellor of the Exchequer Rishi Sunak will deliver a cautious message even as he announces forecasts showing a big upgrade to growth for this year and a healthier picture for the public finances.”

Financial markets have priced in a BOE rate rise next week, when Governor Andrew Bailey updates forecasts, and further increases next year. Chief Economist Huw Pill has warned prices may surge well above 5%, at least a full percentage point higher than policy makers estimated in September. There’s no sign the BOE will add to the 440 billion pounds ($605 billion) it poured into buying government bonds to keep a lid on borrowing costs since the pandemic started.

The Treasury estimates every percentage point increase in interest rates, market borrowing costs and inflation adds 25 billion pounds to public borrowing annually. Since the pandemic started, the BOE’s asset purchases have so closely matched the Treasury’s borrowing that Bailey has had to fend off accusations that he’s supporting Sunak’s deficit.

Those tensions complicate Sunak’s aim to bring order to the public finances, which have been ravaged by the pandemic. The Treasury spent 370 billion pounds supporting workers and businesses through the pandemic, accumulating the biggest peacetime deficit in Britain’s history.

While Sunak’s short-term goal seem to be more about restraint than outright austerity, the new stance contrasts sharply with the situation in the past decade. When George Osborne was chancellor in aftermath of the financial crisis, he enjoyed loose monetary policy that helped bolster growth as he ratcheted back public spending.

The new outlook for tighter monetary policy is one reason Sunak is likely to show restraint in his budget. Treasury officials are concerned that more largess would stoke inflation and prompt a quicker rise in rates from the BOE.

That will leave Sunak likely to announce a few carefully targeted measures to aid groups that have been hit hardest by the pandemic, like low-income households and those struggling with higher energy costs. Over the weekend, the Treasury confirmed one of those programs would inject 6 billion pounds into the National Health Service to clear waiting lists and improve IT systems.

Beyond any impact on gilts, rising interest rates and an absence of BOE bond buying would start to restrain the economy and add to Sunak’s costs in the form of debt service.

Worse, the mechanisms that supported the BOE’s bond buying benefited the Treasury during the pandemic. Reversing them will add to the drag on the public finances. That’s because the reserves created to fund asset purchases at the BOE are financed at the bank’s main interest rate, with the cost passed onto the Treasury.

The result is that U.K. public finances are now six times more sensitive to interest-rate changes than they were before the financial crisis, according to the Office for Budget Responsibility.

The jump in inflation the BOE is concerned about will hit the Treasury in a number of ways -- directly through an increase in interest rates, and indirectly via an increase in the cost of pensions and debt linked to inflation rates.

A quarter of the gilts sold by the Treasury have payouts linked to the Retail Price Index, which has risen even more than the inflation measure targeted by the BOE. The Office for National Statistics says interest payments were 50% higher between April and September when compared with a year ago.

The higher cost of living has also led to pressure on the chancellor from members of Sunak’s own Conservative Party to help soften the blow through tax cuts on energy and beer, among other items.