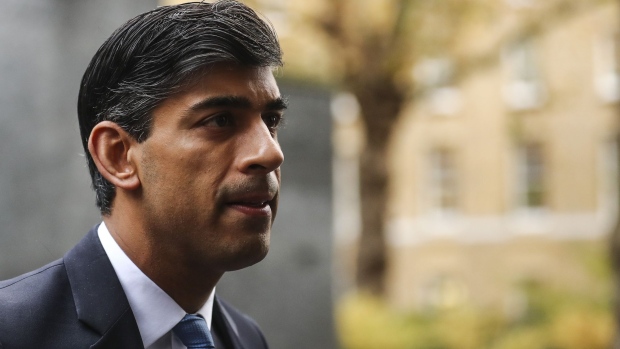 (Bloomberg) -- Rishi Sunak may wait until the spring to deliver his next U.K. budget, people familiar with the matter suggested, giving the Chancellor of the Exchequer time to assess the economic damage caused by the pandemic.

After delivering his last budget in March, Sunak was expected to deliver a fresh spending blueprint in the fall, given his predecessor Philip Hammond had shifted the annual statement to that period from the spring in 2016 to give businesses more time to prepare for any tax changes in the new financial year.

But on Friday, two people familiar with the matter left open the prospect of a spring budget, telling Bloomberg no decision had been taken on its timing.

Speaking on condition of anonymity, one of the people pointed out that despite Hammond’s new rule, the last two budgets have both taken place in March. The other said a spending review outlining government departmental budgets is set for the fall.

Sunak is trying to steer the U.K.’s recovery from its worst recession in three centuries, while reining in a budget deficit that’s ballooned to a peacetime record as the government spent 352 billion pounds ($485 billion) to fight Covid-19 and protect businesses and jobs.

Delivering the budget in the spring would give more time to assess the fallout from the pandemic as well as the effect of unwinding various Treasury support measures. The furlough program, which ensured idled workers received as much as 80% of their wages, has begun to taper and is due to end on Sept. 30.

The Guardian newspaper reported Friday that Sunak is considering “pushing” the budget until the spring.

“There is no need to make any decisions on when a budget will be held now,” the Treasury said in a statement following the Guardian report. “The spending review will be launched in the usual way.”

Meanwhile one of the people familiar with the matter said this fall’s departmental spending round is likely to cover three years, after the two previous ones only covered a single year.

It is also likely to be tough on some departments as Sunak focuses on government priorities while seeking to rebuild the public finances. Even before the Treasury has launched the review, which involves writing to all departments, ministries had already been asked to look for savings.

Unfunded pressures on government departments total about 30 billion pounds ($42 billion) over the next three years as a result of the pandemic, the Office for Budget Responsibility, the government’s fiscal watchdog, said this month.

While last year’s spending review mostly covered a single year, Sunak has also promised to fund multi-year plans for the National Health Service and schools, and priority infrastructure projects such as high-speed rail. He also agreed to 24.1 billion pounds of new defense spending over four years.