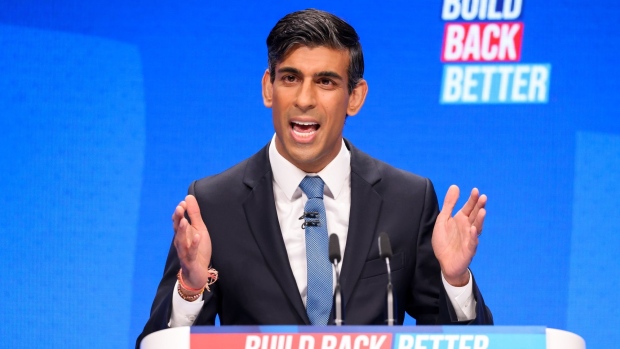 Rishi Sunak, U.K. chancellor of the exchequer, delivers his speech on day two of the annual Conservative Party conference in Manchester, U.K., on Monday, Oct. 4, 2021. The U.K.'s governing Conservatives are meeting for their annual conference as the country grapples with a series of crises that threatens to undermine its economic recovery from the pandemic. Photographer: Hollie Adams/Bloomberg , Bloomberg

(Bloomberg) -- Chancellor of the Exchequer Rishi Sunak is set to announce a 5.9 billion-pound ($8.1 billion) injection funds into the National Health Service at this week’s budget, part of the U.K. government’s effort to clear backlogs caused by the pandemic.

The boost, announced late Sunday by the Treasury, is one of the biggest pledges unveiled so far in advance of the budget statement due Wednesday. It’s one of a few giveaways likely in the plan where Sunak is set to restore rigor to public finances after building up a record debt burden.

His task, which he has called a “sacred” duty, is complicated by a stuttering economic recovery, faster inflation and a surge in virus cases. Those factors are adding to stress on the health service.

Sunak pledged earlier Sunday to continue to plow more money into public services even though the overall package is likely to restrained compared to the largess the Treasury offered to protect the economy from the pandemic.

Part of that investment will be designed to help the health service, the Treasury said. The funding will help address a building waiting list of non-emergency tests by setting up more diagnostic centers, as well as going toward efforts to modernize digital technology,

The “budget is about the future,” Sunak told Sky in one of three interviews on Sunday. “It’s about building that stronger recovery for our country.”

“It actually means very strong continued investment in public services. It means driving our future economic growth by investing in infrastructure, innovation and skills. It means giving businesses confidence through all the things we’re going to do to support them, and lastly it means supporting working families as we have done through the last year.”

There isn’t a “magic wand” the government can use to bring down inflation, which has mainly been pushed higher by global factors, Sunak said, citing high energy prices and the strain on supply chains caused by economies re-opening after the pandemic. He said he also alive to risks price gains -- and Bank of England rate rises -- can pose to the public finances.

“The risk of inflation and interest rates is one that we can see already today, and there might be other things that we don’t know about,” Sunak told Times Radio on Sunday. “I have to think about what might happen to us in the future, and build into our plans some resilience to cope with that uncertainty or the potential adverse shocks that come our way.”

In an article for the Sun newspaper this weekend, Sunak promised to support families feeling the pinch from rising energy and food costs.

Shunned and Unloved, U.K. Business Is Boxed In by Boris Johnson

Measures announced before this week’s Budget and Spending Review include: