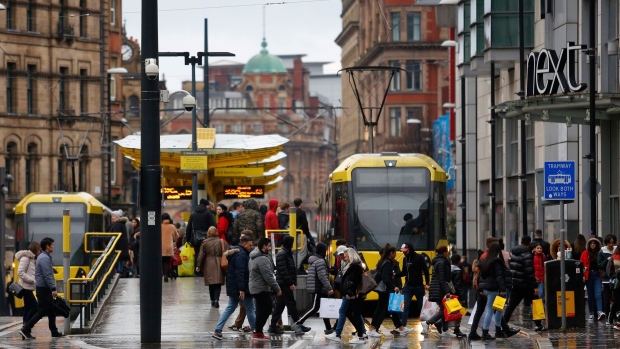 Shoppers and pedestrians walk across tram tracks outside the Pedestrians cross a street near Manchester Arndale Shopping Centre, in Manchester, U.K., on Thursday, Dec. 26, 2019. It's been a tough year for U.K. retailers, who have been hit by a double whammy of political uncertainty and the rise of online shopping. , Bloomberg

U.K. Chancellor of the Exchequer Rishi Sunak vowed to plow more money into public services in this week’s budget as he seeks to boost Britain’s recovery from the worst recession in a century.

The “budget is about the future, it’s about building that stronger recovery for our country,” Sunak told Sky News on Sunday.

“It actually means very strong continued investment in public services. It means driving our future economic growth by investing in infrastructure, innovation and skills...It means giving businesses confidence through all the things we’re going to do to support them, and lastly it means supporting working families as we have done through the last year.”

“Those things combined are what deliver a stronger economy for the British people, and that’s what next week’s budget is going to do,” he said.

Sunak is preparing to deliver a budget and spending review on Wednesday against the backdrop of a stuttering recovery and rising virus cases. There’s also the growing threat of faster inflation and rising interest rates, which increase the cost of servicing a U.K. debt load that swelled during the pandemic and now stands close to 100% of economic output.

The chancellor has called it his “sacred” duty to restore fiscal rigor to the public finances, and in an effort to balance the books, he’s already frozen income tax thresholds and public sector pay, cut foreign aid, announced plans to raise corporation tax by six percentage points from 2023, and unveiled plans for a new tax on workers, employers and dividends to fund health and social care.

Shunned and Unloved, U.K. Business Is Boxed In by Boris Johnson