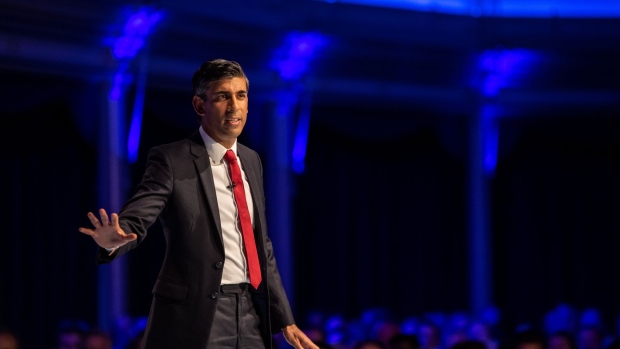 (Bloomberg) -- Rishi Sunak has ruled out freezing the UK’s energy price cap if he becomes prime minister, while his rival Liz Truss warned against “throwing money” at a short-term fix for the looming winter bills crisis.

Speaking at a hustings in Perth, Scotland, the Conservative leadership contenders gave their first public response to Labour leader Keir Starmer’s announcement this week that he would freeze the cap on energy bills at £1,971 ($2,380) a year, instead of allowing it to rise again in October.

The cap -- the maximum energy suppliers can charge households -- is currently due to jump to around £3,582 at that point, according to the industry analyst Cornwall Insight, and could soar again to £4,266 in January 2023. In October 2021, the average annual energy bill was £1,400.

Starmer said on Monday that under Labour’s plans people would “not pay a penny” more for their energy this winter.

But former Chancellor of the Exchequer Sunak argued “I don’t think that’s the right approach,” instead repeating his commitment to target support at the poorest households and pensioners.

Truss once again would not be drawn on how she would help households this winter, other than repeating her promises of tax cuts. She did not directly respond to Starmer’s policy.

The foreign secretary did however suggest that she would not support anything that resembled a “sticking plaster” that would be only a short-term fix for six months or so.

Truss insisted it would not be right to “throw money at the problem” without “dealing with the root causes” on weakness in Britain’s energy security.

That approach might help high earners but would only be worth “a quid a week” to someone on the national living wage, and “precisely zero” to pensioners, Sunak claimed, adding that such a move would be a “moral failure” and push millions of people into “destitution.”.