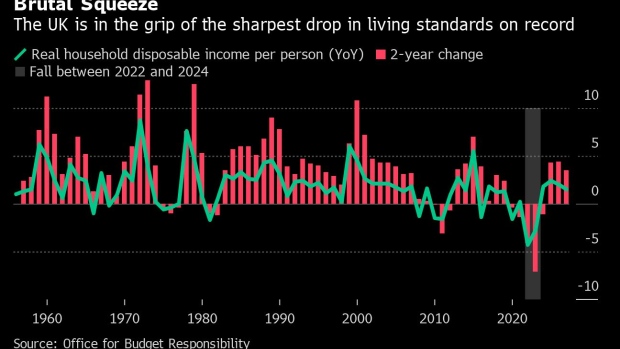 (Bloomberg) -- Rishi Sunak may be about to discover that his political opponents are more difficult to pacify than investors.

The British prime minister managed to calm financial markets with an austere fiscal program based on major tax rises as his first move after taking office. Sunak and Chancellor of the Exchequer Jeremy Hunt are now devising a strategy for phase two, according to government officials.

Hunt is working on a raft of policies aimed at boosting the UK’s lackluster growth and bringing people back into the labor market, the officials said. But the government isn’t likely to announce most of those measures until the Budget in spring 2023.

The long wait for a more optimistic message will leave Sunak’s government vulnerable to attacks from his own backbenchers as well as the opposition Labour party as he leads the country through a winter of strikes, recession and soaring energy prices .

Some Tory lawmakers are demanding more radical pro-growth policies, another faction is concerned about protecting the rural way of life for their affluent voters. Most of them are worried about what Sunak can do to reduce the opposition Labour party’s 21-point lead in the latest opinion polls.

The first assaults have already begun.

Former cabinet minister Simon Clarke, who served in Liz Truss’s short-lived government, has submitted an amendment to a leveling up bill that would ease the UK’s effective ban on onshore wind farms.

In a sign of how serious this rebellion could become, both Truss and her predecessor Boris Johnson have signed the amendment, in their first significant dissenting move against the new premier. The pro-growth lawmakers are determined to put Sunak under pressure, one MP said.

The faction is likely to cause problems for the government on a series of other policy issues in the near future. They can be expected to demand action on Brexit opportunities, infrastructure, childcare ratios and measures to increase productivity.

“The UK’s core problem is dreadful productivity even by G7 standards and really weak investment spending,” economist Jim O’Neill, a former Tory minister who subsequently left the party, told Bloomberg TV this week, arguing that Sunak’s austerity strategy was a mistake. “We need a government that’s prepared to borrow to invest.”

But Sunak finds himself caught in pincer movement, with those who want to block things like building new homes, staging also their own rebellion earlier this week.

The prime minister was forced to pull a vote in the House of Commons on its housebuilding targets, following a rebellion from a group of backbenchers largely in leafy, rural seats who don’t want large numbers of new homes built in their constituencies.

That setback calls into question Sunak’s plans for boosting living standards outside the wealthy southeast of England.

The government would have won the vote if it had decided to face down the rebels, because the main opposition Labour party would have supported the proposal, a Labour official said, pointing out that Sunak had chosen to protect party unity instead of pushing ahead with his vision for the country.

With no major policy plans to rally support, Sunak has baffled some MPs by also ceding ground in the daily media battle.

That’s a mistake, Tory MPs and strategists said, because it allows Labour to put their own spokespeople up to attack the government unopposed. It’s inevitable the government will U-Turn on the decision, one Tory predicted.

The lack of direction and the scale of the challenges facing the party is sapping the morale of MPs and dozens of Tories are likely to announce over the next couple of weeks that they will stand down at the next election, a government official said. MPs have until Dec. 5 to tell the party headquarters of their intentions.

Former minister Chris Skidmore, 41, told the Telegraph late Saturday he was stepping down because his seat was set to be abolished and he didn’t want a new constituency. A day earlier, Dehenna Davison, the 29-year-old who won the northern seat of Bishop Auckland for the Tories for the first time in 2019, said she wouldn’t be running again. Backbenchers William Wragg and Chloe Smith have also announced their intention to quit Parliament.

Downing Street is also concerned that Deputy Prime Minister Dominic Raab may not be able to survive an investigation into allegations of bullying. On Friday, No. 10 announced a third formal complaint had been submitted against Raab. He denies all the allegations.

The government had initially hoped that by using formal complaints as the threshold for an investigation, Raab would be insulated as initially no complaints had gone in. Senior government figures did not expect multiple complaints to then be filed, one official said. Their hope is that the probe will conclude that Raab is not a bully but just unpleasant to work for.

Government officials are also increasingly alarmed about a wave of strikes bringing the country to a halt over the winter. Nurses, rail and postal staff are all planning strike action in the coming weeks. A government official said they were worried the amount of industrial action was approaching the level of a general strike.