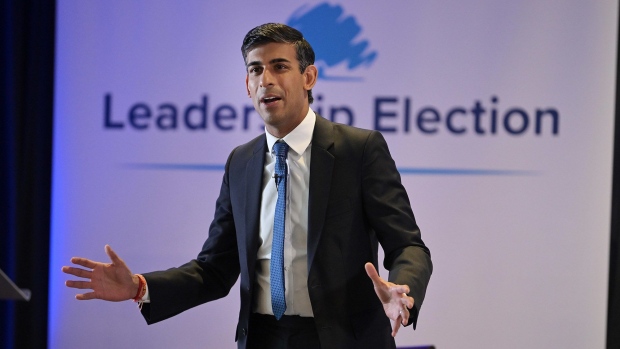 Tory leadership hopeful Rishi Sunak said he’s still in contention to be the UK’s next prime minister, despite the latest polling showing him well behind rival Liz Truss.

“I’m going to fight hard until the last day of this thing,” Sunak said on Thursday in an ITV interview. When asked if he has a shot at winning, Sunak said: “Yes, definitely.”

Sunak’s confident remarks belie the polling: A survey of UK Tory party members by the ConservativeHome website on Wednesday showed he trails Truss by 32 points. YouGov and Opinium polls have also given the foreign secretary a double-digit lead, and Sunak shows little sign of making inroads with less than 3 weeks of the contest left to run. The result is due on Sept. 5, with the winner taking over from Boris Johnson the following day.

The former chancellor -- whose resignation from the cabinet helped precipitate Johnson’s departure -- also used his interview to slam the opposition Labour Party’s £29 billion ($35 billion) plan to protect consumers from soaring prices by freezing a price cap on domestic power and gas, saying it risks taking the country back to an inflationary spiral akin to the 1970s.

“It’s really risky for a government to borrow an enormous amount of money and pump that into the economy,” Sunak said of Labour’s proposal. “That’s when inflation gets worse, it’s like putting fuel on the fire.”

Sunak instead reiterated his own plan of slashing Value Added Tax from energy bills, with additional assistance targeted at pensioners and low-earners.