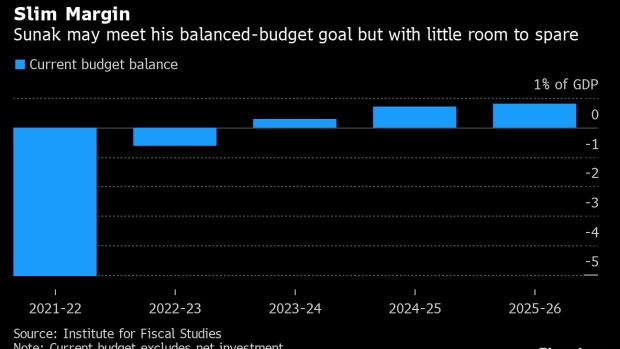 (Bloomberg) -- Chancellor of the Exchequer Rishi Sunak is likely to pocket most of the extra proceeds from a record rebound in Britain’s economic growth as he delivers his annual budget on Wednesday.

Output has recovered more than budget officials anticipated when they last released forecasts in March, allowing Sunak to deliver what’s likely to be the biggest upgrade in four decades of forecasting. He’s due to speak to Parliament at 12:30 p.m. London time.

With an eye on the next election that’s still years away and concerns that fanning the economy now would lift inflation and interest rates, the chancellor is likely to hold off on a big dose of largess for now. While the Treasury has already announced billions of pounds of spending in the past few days, none of that will compare to the scale of stimulus that helped the country through the coronavirus pandemic.

“The announcements over the past few days have made it sound like we’re in for a big giveaway budget,” said Bloomberg Economics Senior U.K. Economist Dan Hanson, adding that much of the “noise” is Sunak allocating a spending envelope he’s already set. “Any new money is likely to be in short supply.”

Inflation is already increasing interest payments after Sunak accumulated more than 2 trillion pounds ($2.8 trillion) of debt. That’s rung alarm bells at the Bank of England, which investors anticipate is likely to lift interest rates as soon as next week.

Sunak faces a tricky balancing act in this year’s budget, which includes a three-year spending review. If he ladles out too much, he risks sparking inflation and adding to a cost-of living pressures weighing on ordinary Britons.

But he also will be mindful of leaving the poorest people with little support ahead of a difficult winter. Tightening the public purse strings too much might strangle a recovery that has faltered in recent months.

The budget “begins the work of preparing for a new economy post Covid,” Sunak said in remarks released by his office Tuesday night, adding that it will be “an economy fit for a new age of optimism” that will deliver “higher wages, higher skills, and rising productivity.”

There are also political considerations. He’s already set the U.K. tax burden on a path to its highest sustained level since at least 1955 -- something previously unimaginable for any Conservative chancellor. The signs are Sunak will hold some tax-cutting ammunition in store for closer to a general election that must be held in 2024 at the latest.

Up until now, the Treasury has been trumpeting its support for the economy. The spending envelope set by Sunak will raise core expenditure by government departments by 140 billion pounds per year through March 2025, compared to the beginning of the five-year Parliament. And the government has also pledged 600 billion pounds of investment over five years.

Since Friday, the Treasury has used 18 separate announcements to trail budget decisions. Those include an end to the public sector pay freeze he imposed a year ago, a large rise in the national living wage, and spending totaling almost 31 billion pounds on everything from sports fields and museums to border security and medical diagnostics. Of that, at least 5.9 billion pounds had already been announced.

Because of the surge in growth, HSBC Holdings Plc expects the government’s independent fiscal watchdog, Office for Budget Responsibility, to revise down its borrowing projection for 2021/22 by almost 40 billion pounds. The OBR could also revise upward its growth forecasts for 2021 to 6.6% from 4%, according to the HSBC. The Bank of England predicts 7.25% growth.

While Sunak has touted the planned increase in departmental spending as the biggest during any Parliament this century, protected spending in areas like health and defense mean other areas may take a hit. The Institute for Fiscal Studies said earlier this month that spending in areas such as justice, local government and education may be squeezed.

The cost of living is another issue Sunak must address even after he loosened restrictions on wages. Consumers are struggling with record petrol prices, surging heating bills and inflation that’s well above the Bank of England’s 2% target. That’s come as the Treasury curbed the furlough program, which supported wages during the pandemic, and ended a temporary uplift to Universal Credit benefits.

“We don’t want to see prices rising ahead of wages and therefore wiping out the benefit those increasing wages would have,” Damian Collins, a Tory member of Parliament, told Times Radio on Tuesday.