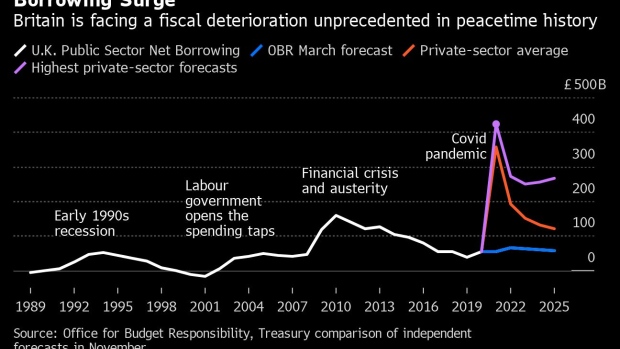 Rishi Sunak, U.K. chancellor of the exchequer, arrives for a weekly meeting of cabinet ministers in London, U.K., on Tuesday, Nov. 10, 2020. The U.K.'s House of Lords rejected government plans to break international law over Brexit, putting the onus back on Prime Minister Boris Johnson, who immediately vowed to push ahead with the legislation. , Bloomberg

(Bloomberg) -- Chancellor of the Exchequer Rishi Sunak will commit to increased spending on infrastructure and public services this week as he seeks to shore up the U.K. economy amid the “enormous strain and stress” of the coronavirus pandemic.

Investment in building schools, hospitals and prisons will be announced alongside funding for nurses and police officers, his office said late Sunday as the chancellor prepares to unveil departmental budgets on Wednesday.

“This has been a tough year for us all, but we won’t let it get in the way of delivering on our promises,” Sunak said in an emailed statement. “The British people deserve outstanding public services, and we remain committed to delivering their priorities as we put our public services at the heart of our economic renewal.”

The chancellor is seeking to balance the need to support the economy against the long-term risks of ballooning government borrowing. Even as he battles with the current crisis, he has an eye on ensuring the public finances are prepared to weather future shocks, he said in media interviews on Sunday.

Forecasts from the Office for Budget Responsibility will show the stress on the economy is “enormous” and ministers are looking at the effect of restrictions to stop the spread of the pandemic on all sectors, Sunak said. He refused to answer questions about potential tax rises, saying Wednesday’s announcement is focused on spending.

“Now is the right time to focus on responding to the crisis and that means, yes, we will be borrowing quite frankly an enormous sum this year,” Sunak told BBC TV. “That is the right thing to do for the long-term health of the economy and public finances.”

Sunak’s spending has driven debt above 2 trillion pounds ($2.7 trillion) for the first time on record, exceeding the size of the economy for the first time since the 1960s, and the chancellor said it is “clearly not sustainable” to borrow at such a high level once the pandemic has passed.

The spending review will include an increase in spending on schools to 49.8 billion pounds in 2021-22 compared to 47.6 billion pounds this year. It will also reaffirm Sunak’s commitment to existing plans for building prisons and hospitals as well as hiring more police officers and nurses, his office said.

But the chancellor appeared on a collision course with labor unions as he refused to rule out a freeze in pay for public sector workers, saying it would be considered alongside data on wages and prices in the wider economy.

“It would be fair to also think what’s happening with wages, with jobs, with hours across the economy when we think about what the right thing to do in the public sector is,” Sunak told Sky.

Union leaders have reacted with anger at the suggestion pay might be frozen, arguing it is their members who kept the U.K. economy afloat during the darkest days of the crisis. Frances O’Grady, general secretary of the Trades Union Congress, refused to rule out strike action.

“There’s still time for the government to step back and I would encourage them to think again, this is not smart politics, it’s morally obscene and it’s bad economics too,” she told Sky News. “This is absolutely the wrong time to be talking about pay cuts, and instead we need to start talking about fairness.”