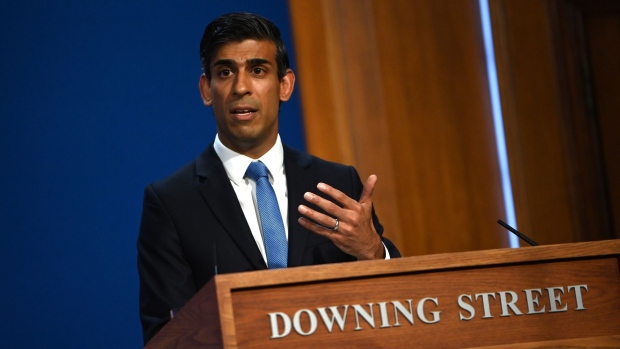 (Bloomberg) -- UK Chancellor of the Exchequer Rishi Sunak remained committed to his windfall tax on oil-and-gas profits despite protests from industry executives during their first meeting since the announcement.

Sunak, who announced last month he would impose the 25% levy, told them the tax would be temporary and is a vital way to support households facing a surge in the costs of living.

The discussion with about 20 oil and gas business leaders, which took place in Aberdeen, Scotland, on Thursday, was “candid and constructive,” according to the Offshore Energies UK industry group. But the lobby reiterated that it would hit investor confidence in the country.

“The Energy Profits Levy is an unexpected new tax that changes the basis for investments,” OEUK Chief Executive Deirdre Michie said in a statement. “We had a candid and constructive meeting with the chancellor to discuss these issues and our industry leaders were clear about their concerns, especially the impact on investor confidence.”

The fossil-fuel industry’s profits have swelled this year on the back of a rebound in demand, soaring energy prices and Russia’s invasion of Ukraine. These have increasingly sat uncomfortably aside the UK’s highest inflation in decades and rising utility bills.

The meeting between government and industry comes just five days before the consultation on the proposed bill is due to close.

“We welcome the consultation on the draft bill,” Andy Samuel, chief executive of the North Sea Transition Authority said in a statement. “It is crucial to get it right and more broadly to restore investor confidence and support important projects including clean power for offshore installations.”

The levy has been criticized across the sector, with BP Plc saying it would review an £18 billion investment plan in the UK as a result. The UK’s largest oil and gas producer, Harbour Energy Plc, recently asked Sunak to rethink the levy because it would disproportionately affect independent firms over majors such as BP and Shell Plc.

The industry and Sunak have committed to further discussions on the levy, OEUK said.