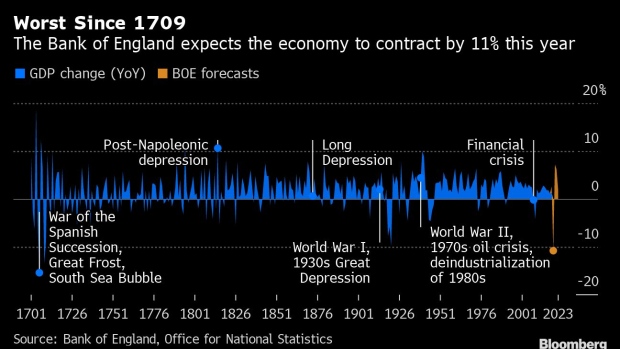 (Bloomberg) -- Rishi Sunak will this week begin grappling with Britain’s most challenging fiscal blowout since World War II, in what will ultimately become the defining test of his tenure as chancellor of the exchequer.

On Wednesday, the finance minister will unveil departmental budgets for the next financial year on everything from education to defense, providing hints both on his approach to tough choices and his determination to reassert the fiscal restraint anchoring the soul of the Conservative Party ever since Margaret Thatcher in the 1980s.

Against the backdrop of a deficit nearing 400 billion pounds ($531 billion), an imminent jolt in trade relations with the European Union, and the need to fund emergency pandemic aid and Prime Minister Boris Johnson’s expensive spending pledges, discerning Sunak’s true priorities may not be easy.

But that won’t stop competing Conservative factions from scrutinizing the chancellor’s words to assess his policy preferences, and his steadfastness on reining in the public finances -- goals that could help define the party for a generation, just as Thatcher’s did before it.

“The chancellor faces a cat’s cradle of competing pressures,” said Steve Baker, an influential Conservative who sits on the House of Commons Treasury Committee. “It’s imperative he lets the public know that we continue to believe in sound money and balanced budgets. And yet it’s essential that he doesn’t deliver a hammer blow by contracting spending.”

Fiscal conservatives such as Baker are at the heart of simmering arguments within the party as to what size and role the British state should take after Brexit, including its foreign aid budget.

Preventing anyone from reading Sunak’s mind too closely is the uncertainty of the pandemic, which has already forced him to delay choices on tax increases, and curtail the timespan of next week’s announcement to just one year instead of three.

“It will provide a progress report on what compromises have been reached between those who say we should seize advantage of historically low interest rates to borrow in order to invest significantly in infrastructure and in R&D, and those who say that it has to be paid for,” said David Lidington, who was former Prime Minister Theresa May’s de facto deputy.

The signs are that advocates for more spending, including Johnson, have the upper hand for now. An infrastructure strategy laying out 100 billion pounds of spending will accompany the review. And on Wednesday, the premier announced a 12 billion-pound plan for a “green industrial revolution” to show the U.K. is leading on emissions reductions.

“The government is going to plow on with its pretty big spending agendas, namely leveling up regional economies outside London and the green agenda,” said HSBC economist Chris Hare.

Sunak himself has led the spending effort with successive mini-budgets to increase aid for the economy. But he has also proclaimed a mantra of getting the public finances in order, what he calls a “sacred duty.”

The chancellor may impose some rigor next week, with a squeeze on pay being considered for some 3.8 million public sector workers who don’t work in health care. The Centre for Policy Studies reckons that could save 15.3 billion pounds over three years.

But Sunak’s previous attempts to curb expenditure have been stymied. Over the summer, the government agreed to provide free meals for Britain’s poorest children following a campaign by England soccer player Marcus Rashford. This month, the chancellor extended his flagship furlough program after previously insisting it would end.

A fresh retreat came on Thursday when Johnson announced 24.1 billion pounds of new defense spending over four years, instead of a one-year pledge sought by the Treasury.

Many such commitments are “permanent increases in the size of the state,” said Ben Zaranko, an economist at the Institute for Fiscal Studies. With the economy weaker and Tory backbenchers resisting tax rises, “it’s really hard to see how, at least over this Parliament, anything takes the strain other than higher borrowing.”

“Sunak will likely perform a balancing act between supporting the recovery in the near term while also signaling there’s a repair job to be done on the public finances in the medium term.”

One contentious area for potential savings is overseas aid, set by law at a minimum of 0.7% of gross national income. This week, Johnson refused to deny that the threshold might be temporarily squeezed.

That may please fiscal hawks, but former ministers including Tobias Ellwood deplore the idea as diminishing U.K. influence just when it’s trying to portray a global outlook.

“I hope the chancellor does not choose to balance the books on the back of the world’s poorest,” said Harriett Baldwin, a former development minister.

Sunak is also under pressure to extend a 20-pound-a-week uplift in welfare payments, and has also promised multi-year decisions on health and schools despite the shortened spending review.

What gives the chancellor breathing room is that his emergency spending is historically cheap thanks to the Bank of England’s quantitative easing buying up bonds and making debt service cheaper.

But such a grace period won’t last forever, and no matter what signal comes on Wednesday, Sunak must eventually decide how firmly to steer the Conservative Party back toward its fiscally restrained roots. Lidington sees lessons in a previous Tory deficit-cutting effort.

“Older MPs will remember 1997, when John Major and Ken Clarke went through agony to balance the books,” he said. “The public said ‘thank you very much,’ and then handed Tony Blair a landslide.”