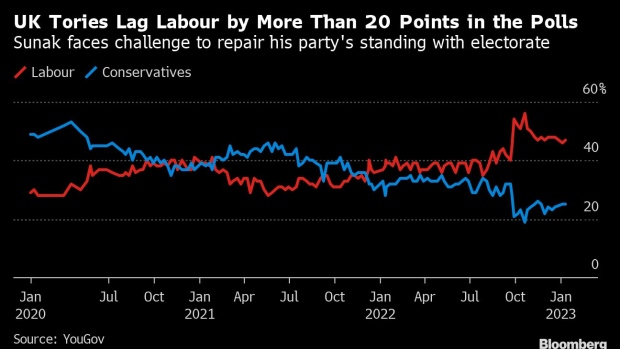 (Bloomberg) -- Rishi Sunak’s cabinet will gather at the UK prime minister’s countryside residence of Chequers on Thursday to discuss his government’s priorities and the electoral prospects of the ruling Conservative Party.

But among those due to attend is one major distraction: Tory Chairman Nadhim Zahawi, whose job is hanging in the balance after he conceded over the weekend that he’d been “careless” with his taxes and had settled a retroactive bill with the country’s tax collector.

Zahawi has so far refused to step down, even as Sunak ordered an ethics inquiry into the behavior. The prime minister, meanwhile, has stood by his chairman, telling the House of Commons on Wednesday that Zahawi is entitled to “due process” — while suggesting the easy option would have been to fire him.

“The politically expedient thing to do would be for me to have said this matter must have been resolved by Wednesday at noon,” Sunak said, referring to the starting time of his weekly question-and-answer session in the Commons. “But I believe in proper due process.”

But the premier is under growing pressure from the opposition and within his own party to eject Zahawi, who is also a minister without portfolio in Sunak’s top team. One of the cabinet ministers who will eyeball Zahawi over lunch at the 16th-century Buckinghamshire manor house told Bloomberg News privately that the party chairman should do the decent thing and quit. They asked not to be named for fear of undermining Sunak’s position.

Former Tory minister Caroline Nokes stuck her head above the parapet on Monday, to say that Zahawi should step down while the matter is probed. And on Wednesday, junior minister Andrew Bowie said Sunak could fire Zahawi at the end of the ethics probe — remarks that could well have been pre-approved.

Sunak himself has changed his tone since last week, when he batted away a question about the matter. Then he said that Zahawi had “already addressed the matter in full and there is nothing more that I can add.”

The calculus changed over the weekend when Zahawi issued his statement, in which he acknowledged settling a bill with the tax authority. That bill totaled £4.8 million ($5.9 million), including a 30% penalty for not settling the correct amount at the right time, according to a person familiar with the matter. The settlement took place while Zahawi was Chancellor of the Exchequer in mid-2022.

Another minister told Bloomberg News that the evidence against Zahawi was so strong already that whatever the ethics adviser reports, it couldn’t exonerate his behavior. It would be better for Zahawi to quit, the minister said, pointing to the lack of support shown when only a handful of backbench Tory MPs were willing to defend him when Labour asked an urgent question on the matter in the House of Commons on Monday.

A third minister said Sunak had tied himself in knots over the affair and privately said Zahawi should resign. Another Conservative MP and former minister said privately that Zahawi could no longer fulfill the functions of party chairman and be an effective attack dog against Labour while rallying the Tory grassroots and attracting donors.

The cabinet minister who privately called on Zahawi to resign said any intervention by him was likely to raise eyebrows with colleagues. After a break the cabinet will meet for a session to examine the government’s focus. That discussion is likely to center on Sunak’s five priorities including reducing the national debt and cutting inflation, Sunak’s spokesman Max Blain told reporters on Wed.

Asked if the meeting was a morale boost for miserable ministers, Sunak’s press secretary replied “no” and said it was not unusual to have occasional cabinet meetings away from London. Dragging on everyone’s morale is likely to be the distraction caused by one of their own number.

“We would much rather be focused on the issues that matter to the British people,” Bowie said.