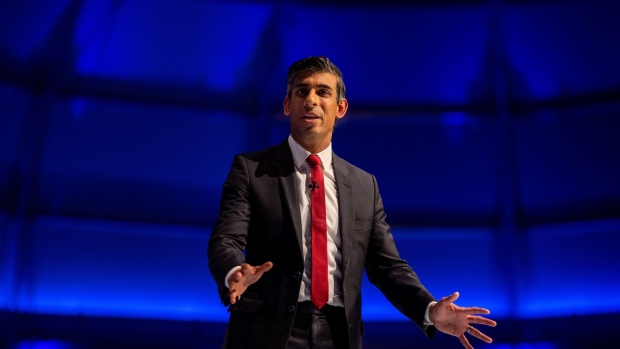 “The bloated post-Covid state is in need of a shake up so I will create a sharper, leaner civil service,” Sunak said late on Monday in a statement.

The former Chancellor of the Exchequer vowed to press ahead with cuts to back office workers, and tackle what he called “groupthink” by ensuring senior civil servants spend at least a year of their careers working on secondment outside Whitehall or in industry.

Truss earlier this month vowed to save billions of pounds by cutting civil service waste, including by slashing holiday allowances, cutting diversity officers, and eliminating what she called “stale groupthink.” But in less than a day, she was forced into an about-turn on the centerpiece of her announcement -- a plan to align public sector pay to regional living costs -- after a furious backlash from Tory politicians.

Sunak’s plan to boost industry secondments among civil servants aims to “deepen departments’ understanding of business,” according to his statement. He’s also seeking to reward expertise and make the civil service more efficient by “ending the unnecessary churn” of workers moving between different government departments, it said.

Moreover, workers will no longer receive pay rewards based on length of service, but rather performance. Sunak also vowed to ensure more civil servants are working in towns and cities outside London.

“I’ll strengthen civil servants’ experience beyond Whitehall, allow ministers to bring in more external expertise, and bring in performance pay so we have a truly Rolls Royce service delivering for and accountable to the British people,” Sunak said.

Sunak lags Truss in polls as the two politicians vie for the votes of some 170,000 Conservative Party members. Voting has already begun, and the former Chancellor has just three weeks remaining to convince undecided Tories to pitch in behind him. The winner will be announced on Sept. 5 and take over from Johnson as prime minister the following day.