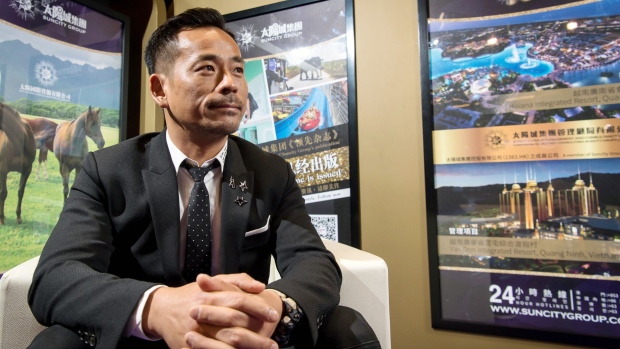 Alvin Chau, founder and chairman of Suncity Group Holdings Ltd., sits for a photograph after an interview during the Macau Gaming Show (MGS) at the Venetian Hotel in Macau, China, on Tuesday, Nov. 14, 2017. Suncity, the biggest junket group in Macau, is rewarding its high rollers with travel packages to attend the Kennards Hire Rally car race in Australia and a limited-edition Christophe Claret watch -- and it's reaping dividends. , Bloomberg

Suncity Chief Executive Officer Alvin Chau has been detained as part of the probe, along with other suspects, police said in a live-streamed press conference on Sunday. The group of 11 people admitted some allegations but refused to cooperate in some other investigations, authorities said.

Macau authorities in September proposed an increase in government supervision of casino operators, signaling tighter control over the world’s largest gambling hub amid Beijing’s efforts to clamp down on money laundering and currency outflows. Suncity is Macau’s biggest junket operator and Chau’s arrest marks the first time such a high-profile figure in the gaming industry has been targeted, suggesting an escalation of the crackdown.

The arrest of Chau could pose a threat to Suncity’s junket license, up for a renewal soon. Macau’s gaming regulator reviews the licenses annually and will unveil the list of successful junket applicants in January. Suncity accounts for more than 40% of the city’s high-rolling betting volumes.

Evidence presented during a press conference on Sunday included about $385,000 linked to the formation of the criminal group, money laundering and illicit gambling. The suspects also transferred illegal capital via accounts in Suncity’s VIP rooms in Macau and underground banks. Investigations are still ongoing and the police are pursuing other suspects, they said.

The only place in the world’s second-largest economy where casinos are allowed, Chinese punters have fueled Macau’s gaming sector to six times the size of Las Vegas.

Police in the Chinese city of Wenzhou said late Friday they had been probing since July the operation of casinos on mainland China, which is a crime. Their investigation showed Chau headed the syndicate, which had a network of 199 shareholder-level representatives and more than 12,000 agents for gambling promotion.

Macau police said its investigation is separate from that of Wenzhou’s authorities, and they don’t have details of the other probe. The suspects will be subject the legal process based on Macau’s laws, police said in response to a question if they would be transferred to mainland China.