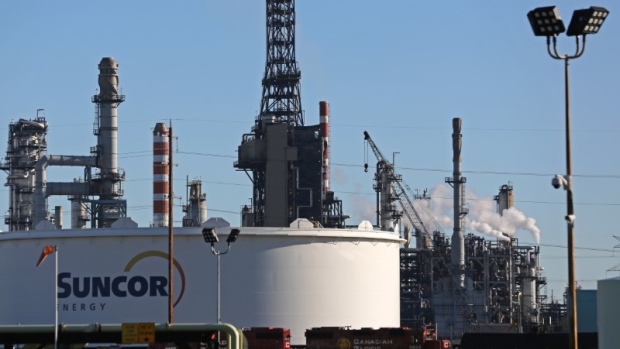 The company reported net earnings of $1.352 billion or 81 Canadian cents per share. In the year-prior quarter, Suncor recorded a net profit of $257 million, or 17 cents a share.

Suncor said earnings were boosted by an unrealized after-tax foreign exchange gain of $103 million on the revaluation of U.S. dollar denominated debt and after-tax gains of $437 million on the sale of its lubricants business and interest in the Cedar Point wind facility in Ontario.

The company said the swing to profit was helped by higher crude prices and a drop in operating costs.

Analysts had predicted earnings of 31 Canadian cents per share, according to Thomson Reuters data.

Calgary-based Suncor is the biggest producer in Canada's oil sands and last year became the majority owner of the Syncrude project, which was forced to cut production last month because of a fire that damaged the plant. The company also has operations in the offshore Atlantic Canada region and the North Sea.

Total oil sands operating costs dropped to $22.55 in the first quarter from $24.25 a year earlier, but the Syncrude fire pushed operating costs at the 350,000 barrel-per-day facility in northern Alberta, one of Canada's largest single sources of crude, to US$45.15 a barrel from US$31.35 in the same quarter of 2016.

The company brought forward planned maintenance at Syncrude as a result of the fire and said it expects to be back to full production by the end of June.

"We were able to partially mitigate the impact of the Syncrude incident by making use of Suncor's operational flexibility and that's an indication of the future benefits of integration," said Chief Executive Steve Williams.