Suncor Energy Inc., once Canada’s most valuable oil producer, is now seeing rivals outrun it in the stock market on the heels of the oil-price boom.

Over the past year, Suncor shares have risen 56 per cent. That’s less than half the gain for competitor Cenovus Energy Inc., which is up 125 per cent, and about half the 103 per cent advance for Canadian Natural Resources Ltd. Suncor is also the only Canadian oil-sands producer to underperform the rise in West Texas Intermediate crude prices during that time. 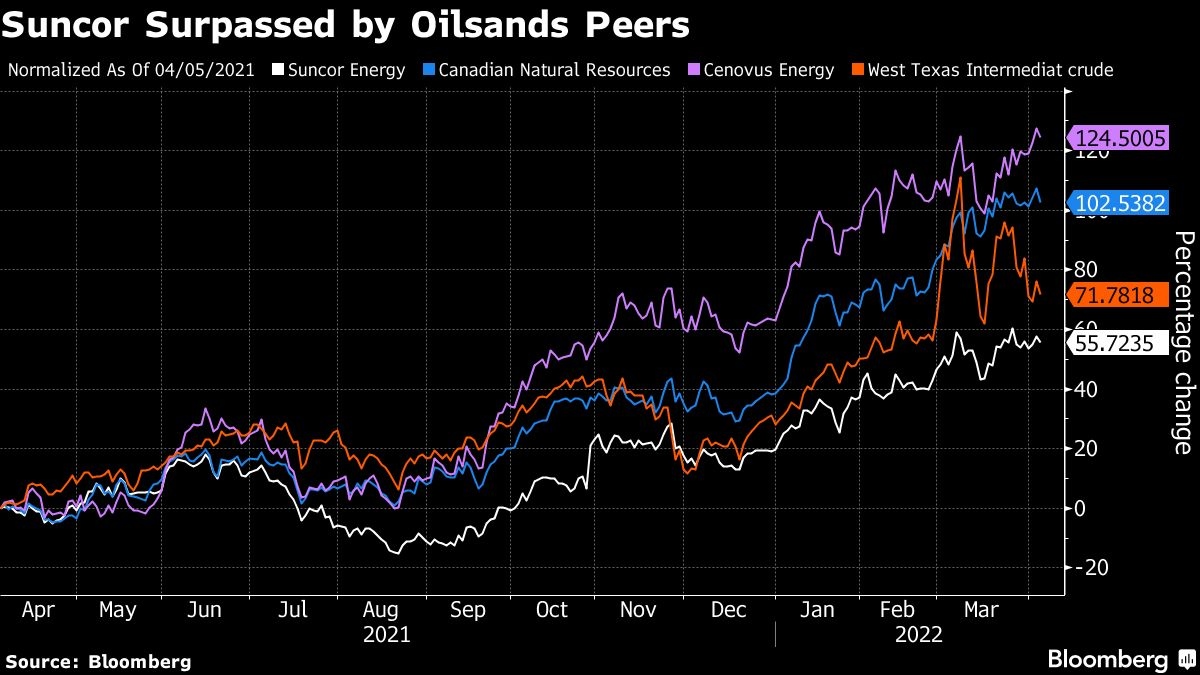 Analysts say the stock is being weighed down by a checkered operational track record compared with its rivals, including a fire that resulted in an injury at a refinery last month and fatal accidents in the last two years. Suncor also cut its production guidance at its Fort Hills oil sands mine in 2021 after finding slopes in the mine were not stable.

Rafi Tahmazian, a senior portfolio manager with Calgary-based Canoe Financial, said the stock was hurt by the company’s decision to slash its dividend during the pandemic, though it has since raised the payout back to 2019 levels.

“The market is looking for proverbial leadership” from Suncor, Tahmazian said.

Suncor has lagged even smaller oil sands names like MEG Energy Corp., which is up more than 270 per cent since the beginning of 2021. “You’re being compared against all ships rising,” Tahmazian said.

In an effort to boost performance, Calgary-based Suncor said Monday it would divest its wind and solar assets to focus on its oil-sands business as well as its hydrogen and renewable-fuels ventures -- the latest in a series of announcements that signal a sharper focus on core operations.

The company also replaced its executive vice-president of mining and upgrading, Mike MacSween, with former LNG Canada CEO Peter Zebedee in the middle of March. But investors say the stock’s performance won’t improve until the market has confidence it has ironed out its problems.

“It does take a while for operational improvements to show up,” said Brompton Group Chief Investment Officer Laura Lau.

She said Suncor is “benchmarked” against Canadian Natural, which has doubled its dividend since 2019 and has not experienced the same operational challenges as Suncor. Canadian Natural overtook Suncor to become the most valuable oil and gas producer in Canada last year.

“Why would I own Suncor when I can own Cenovus?” said Eric Nuttall, a senior portfolio manager at Ninepoint Partners, adding that a string of safety issues need to be addressed before the stock’s performance improves.