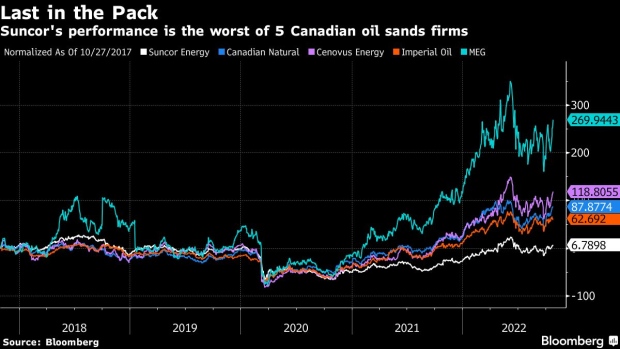 Heavy haulers dump oil sand into a hopper during a grand opening event for the Suncor Fort Hills oil-sands extraction site near Fort McKay, Alberta, Canada, on Monday, Sept. 10, 2018. New technologies such as driverless trucks and froth-treatments that eliminate the need for multibillion-dollar upgraders -- along with U.S. benchmark crude prices closer to $70 -- are helping make the industry profitable again. , Bloomberg

(Bloomberg) -- Suncor Energy Inc., searching for a new chief executive officer and under pressure from an activist investor, will take a C$2.6 billion writedown on its Fort Hills oil sands mine after increasing its stake in the project.

Calgary-based Suncor will buy an additional 21.3% of Fort Hills from Teck Resources Ltd. for C$1 billion ($734 million), the companies said Thursday. That sets a lower market value for the mine, leading to a non-cash impairment charge on Suncor’s existing 54.1% stake.

The company also warned that costs are rising and production at Fort Hills over the next three years will be about 5% lower than its most recent guidance. The mine, built at a cost of C$17 billion, has struggled since starting operation. Last year, Suncor cut its production outlook because of instability on one side that needed repair.

Suncor is facing pressure from activist investor Elliott Investment Management LP to improve its stock price, operating results and safety record after a string of fatalities, including two at Fort Hills. The company has announced the sale of solar and wind energy projects in Canada and some European oil assets and is without a permanent CEO after Mark Little stepped down following a worker death in July.

Suncor attributed the higher operating costs and lower production outlook at Fort Hills to “physical mine constraints as well as accelerated development of further mine pits for increased sustained long-term production.”

Teck’s exit will leave only two partners in the mine -- Suncor, with 75% of the project, and TotalEnergies SE.