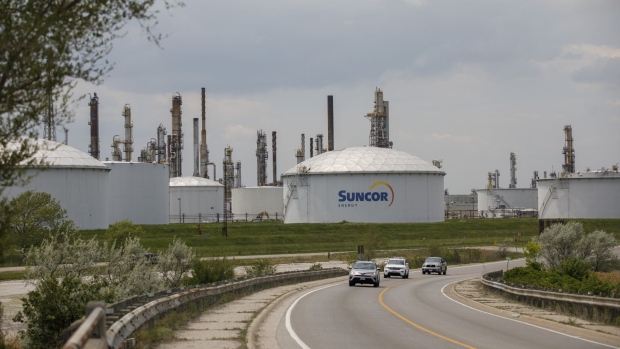 A Suncor Energy Inc. oil refinery near the Enbridge Line 5 pipeline in Sarnia, Ontario, Canada, on Tuesday, May 25, 2021. Enbridge Inc. said it will continue to ship crude through its Line 5 pipeline that crosses the Great Lakes, despite Michigan Governor Gretchen Whitmer's order to shut the conduit. Photographer: Cole Burston/Bloomberg , Bloomberg

(Bloomberg) -- Suncor Energy Inc. is pushing ahead with a bond buyback as oil prices near this year’s lows amid recession worries.

Calgary-based Suncor plans to buy up to C$1.75 billion ($1.27 billion) of securities from 10 series of outstanding notes in US and Canadian dollars, the company said in a statement Monday. Cenovus Energy Inc., another large Canadian oil company, did a similar offer earlier this month.

Suncor is going ahead with the tender weeks after S&P Global Ratings downgraded the company for a second time in less than three years as the ratings firm tightens credit ratio thresholds for Canadian oil companies, citing their more-volatile operating performance than North American peers. The per-barrel price of Brent crude slipped below $85 on Monday, and West Texas Intermediate fell below $80.

Canadian “oil sands producers have benefited significantly from high crude prices and the decline in heavy-crude imports to the US from Venezuela” said Jaimin Patel, a credit analyst at Bloomberg Intelligence. “I wouldn’t be surprised to see further debt reduction for these companies.”

S&P cut Suncor by one step to BBB, its second-lowest investment grade, with a negative outlook as share buybacks may put the company below the ratios demanded by such rating even as Suncor is expected to continue reducing debt, the rating firm said in Aug. 31 statement.