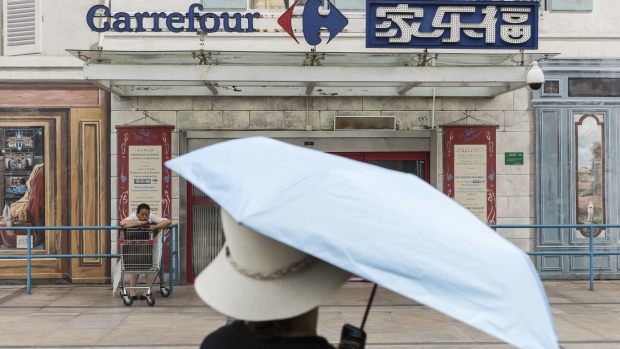 A pedestrian walks past a Carrefour SA supermarket in Shanghai, China, in Monday, June 24, 2019. Carrefour has agreed to sell an 80% stake in its China unit for 4.8 billion yuan ($698 million) in cash to local retailer Suning.com Co. as it rethinks its exposure in the world's No. 2 economy after years of decline. , Bloomberg

(Bloomberg) -- Suning.com Co., the Chinese retailer backed by Alibaba Group Holding Ltd., is weighing a sale of its controlling stake in Carrefour SA’s business in the country, people with knowledge of the matter said.

The seller of appliances and other electronic goods has reached out to prospective suitors to gauge their interest for its 80% stake in the Carrefour China unit, said the people who asked not to be named as the information is private. Suning.com could seek about $700 million to $800 million for the stake, the people said.

Deliberations are ongoing, and Suning.com could still decide against a sale, the people said. A representative for Suning.com declined to comment.

The sales follows Suning.com’s $1.36 billion bailout in July which was led by Alibaba and the Jiangsu provincial government, after its holding company ran into financial troubles and had difficulty paying off debts. Suning founder Zhang Jindong stepped down as chairman after the deal, marking the end of a three-decade acquisition spree that included buying the Inter Milan soccer team.

Carrefour agreed to sell an 80% stake in its China unit for 4.8 billion yuan ($752 million) in cash to Suning.com in 2019, while keeping the remaining 20% stake in the Chinese business.

Sales in China’s supermarket and hypermarket sector fell more than 7% in the second quarter of 2021 compared to a year ago, according to data from Kantar Worldpanel, as more Chinese shoppers shift online or try to shop via new business formats such as community group buying for grocery goods.

Read More: The Industry Walmart Invented in China May Now Leave It Behind

Foreign brands that were once the market leaders in the hypermarket sector are facing stiff competition from more agile locals. Carrefour had a 4.4% share of the market in the sector last year, declining from 7.7% in 2011, according to Euromonitor International. In contrast, domestic chain Yonghui Superstores Co. grew its market share to 11.9% last year from 3.1% in 2011, while China Resources Holdings Co.’s supermarkets jumped to 10% from 6.3% during the same period.