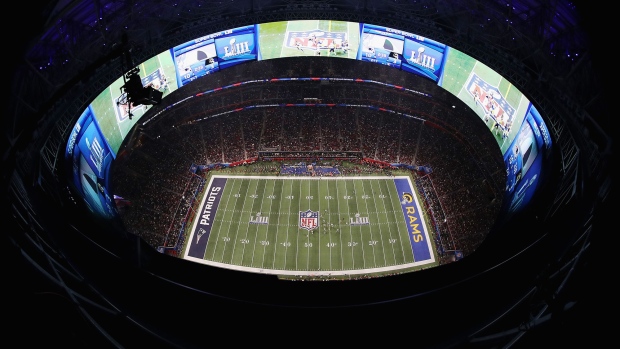 Fox Sports has sold 80 per cent of its Super Bowl commercials, resulting in what one network executive called a game of musical chairs for the remaining inventory.

“It’s a pinch-yourself moment,” said Seth Winter, executive vice-president for sports sales at Fox Corp.’s Fox Sports. “We went in with expectations that we would do well. We’re pacing well ahead of where we thought we’d be.”

According to Winter, the network has sold 60 of the 77 available spots, at record prices of US$5.5 million if an advertiser buys two 30-second ads and US$5.6 million if it takes just one. CBS Corp. sold ads for US$5.1 million to US$5.3 million last year.

There are 25 prospective buyers for the remaining 17 commercials, Winter said, adding that the price tag might go up for the “last handful” of vacancies. He said Fox Sports hasn’t discussed breaking the US$6-million mark.

The Super Bowl, which is historically the highest-rated telecast of the year, is scheduled for Feb. 2 in Miami.

The demand for ads is coming up against less supply, as Fox and the National Football League agreed earlier to sell fewer commercial breaks. The network will present four commercials per quarter, one fewer than in previous NFL championships, in an effort to create a more “free-flowing” viewer experience, Winter said. The reduction has also had the desired result of creating urgency among would-be advertisers, he added.

The second and third quarters are “exceptionally well sold,” Winter said, noting that his sales team has more flexibility in the fourth quarter of the game. Winter said Fox hasn’t considered holding back a commercial slot for sale during the game, saying it’s too risky.

Winter wouldn’t disclose which particular companies had bought commercials. He did say there’s been a lot of interest from beverage, technology, auto and beverage companies, as well as the telecommunications and retail industries.

The coming Super Bowl is pacing ahead of all others except Fox’s 2014 Super Bowl at MetLife Stadium outside New York, Winter said.

“We’ve seen a continuing deterioration of other media,” he said. “Football has been impervious.”