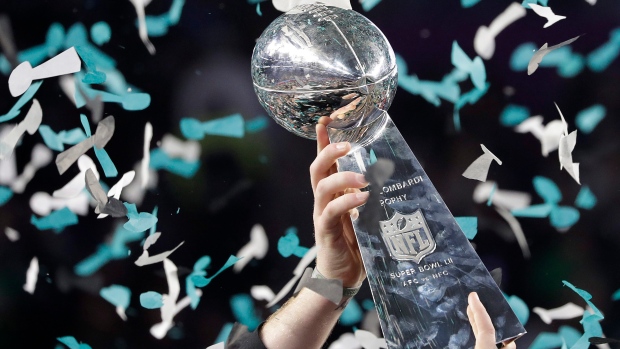 TORONTO — Fewer football fans caught the Super Bowl on a Canadian channel this year as viewers again had the option to watch a U.S. feed featuring buzzy commercials.

Bell Media says it drew an average audience of 4.451 million viewers for the championship NFL game on its channels CTV, CTV Two and TSN2 on Sunday night.

That's down slightly from last year, when an average audience of 4.488 million tuned in to catch the Canadian feed.

But it's a substantial drop from two years ago, when Bell Media says 7.32 million tuned in to a simulcast feed that supplanted U.S. ads with Canadian ones on both Canadian and U.S. channels.

That was the first time in decades that Canadians could watch U.S. Super Bowl commercials as they aired on the U.S. network.

It was the result of a decision by the Canadian Radio-television and Telecommunications Commission to force domestic cable and satellite providers to carry the entire U.S. feed after viewers complained about missing the headline-making ads.

BNN is a division of BCE's Bell Media division.